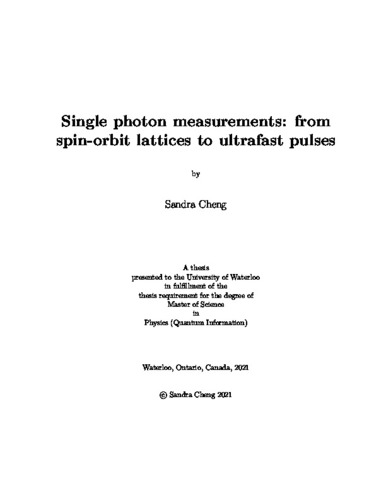 Single photons are naturally suited to quantum information processes as they can carry entanglement in multiple degrees of freedom and maintain coherence easily. In order to fully harness single photons for this use, it is vital to be able to mould, manipulate and measure their properties in all of these degrees of freedom. In the spirit of working towards this overarching goal, this thesis consists of two experiments that control and evaluate entangled single photon pairs. In the first, we generate lattices of spin-orbit entangled photon states which are used in a remote state preparation protocol. The success of the protocol is confirmed by using an electron-multiplying intensified CCD camera and a pixelwise tomography technique. We propose that these hybrid lattice states be used in quantum communications, and quantum sensing and control. The pixelwise analysis may also be helpful for observing other spatially-dependent entangled states. In the second, one partner of an energy-time entangled pair is sent through an ultrafast switch which functions by the optical Kerr effect. It is a work-in-progress with the goal of demonstrating a sub-picosecond switching speed for the further manipulation of single photons. All-optical switching is not limited by electronic speed which makes it important for applications for classical and quantum communications, and imaging and microscopy applications. In particular, we propose that this all-optical Kerr switch is used for the reconstruction of a two-photon entangled state in a third-order cross-correlation.