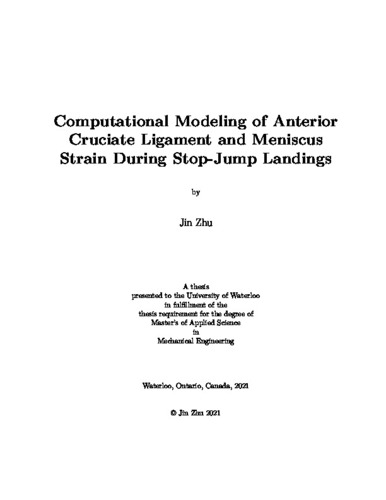 The anterior cruciate ligament (ACL) is one of the most critical joint stabilizers in the knee. Stop-jump landings are a particularly common maneuver that result in ACL injuries due to the large impact forces on the knees combined with forward momentum. The objective of this study was to understand the extent to which certain lower limb kinematic and kinetic parameters contributed to greater ACL and meniscus strains during stop-jump landings. A computational modeling approach was used to simulate this jump landing virtually to allow for analysis of mechanical behavior throughout a 270 ms time window. Available motion capture data from 5 human participants performing a stop-jump landing was used to compute subject-specific muscle forces and 3D kinematic curves in OpenSim software. These outputs subsequently drove a virtual simulation of the jump on a finite element (FE) model of the knee joint in Abaqus CAE. The methodology starts with scaling default models in OpenSim, followed by computing joint kinematics, muscle forces, and joint moments in the right leg. These values were then grouped into 7 sagittal plane inputs for the FE model. The resulting strains were compared to various sagittal plane kinematic and kinetic parameters through bivariate and multivariate regression analysis to identify which parameters were a significant contributor to increased strain. Understanding and quantifying the effects of these parameters on the ACL and meniscus provided insight that may offer biomechanical recommendations on how to prevent ACL and meniscus injury. The resulting average peak ACL strain was 7.9±2.4% and 1.01±0.65% for the meniscus. A bivariate correlation study comparing strain with sagittal plane parameters found that there was a strong correlation between ACL strain and the knee range of flexion during the period from ground contact to peak ground reaction force (GRF) time (r=-0.81, p=0.075). No correlation between high quadriceps forces and increased ACL strain was observed despite the common belief that high quadriceps forces often lead to excessive anterior tibial shear. High internal knee extension moments were correlated with increased meniscal strain (r=0.796, p=0.025), which was likely attributed to the high compressive forces applied to the meniscus while the participant was attempting to decelerate the landing. The knee range of landing flexion was found to offer a more accurate prediction of ACL strain compared to instantaneous flexion, as it is not enough to assess the knee flexion only at a certain instance of the landing. It is rather the additional knee flexion after ground contact up until peak GRF that better characterizes a “soft-landing”. High quadriceps muscle forces can also protect the ACL by resisting anterior tibial translation when the angulation of the tibia relative to the femur results in posterior tibial shear.