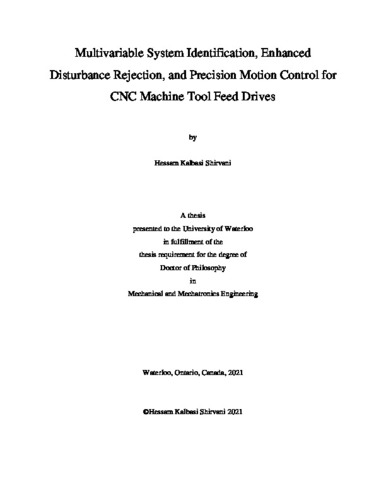 In this thesis, precision modeling, multivariable system identification, and advanced motion control techniques are developed in order to improve the positioning accuracy and disturbance rejection of machine tool servo systems. Improving the positioning accuracy and disturbance rejection in machine tools enables the increase of manufacturing productivity, energy efficiency, and part quality of products produced on such industrial equipment. The implementation results in this thesis were developed on a ball-screw drive, which is the principal motion delivery mechanism used in a vast majority of machine tools. However, the proposed modeling, model estimation, and controller design methodologies are also applicable to other kinds of mechatronic systems, which possess multi-input multi-output linear time-invariant dynamics. In enabling the realization of better productivity, process throughput, and part quality, accurate generation of the relative motion between the workpiece and the tool is critical in multi-axis machining operations. The higher the closed-loop bandwidth (i.e., responsive frequency range) that can be achieved for the servo control system, the more accurately the corresponding feed drives replicate the desired multi-axis tool movements in producing the manufactured parts. Furthermore, the dynamic stiffness (i.e., inverse of mechanical compliance) achieved between the tool and workpiece is critical to absorbing the relatively large machining forces, which are also typically rich in frequency content. Servo bandwidth increase also enables equivalent dynamic stiffness increase, especially in the frequency ranges that overlap with the most significant structural vibration modes of a feed drive assembly. However, the achievable servo bandwidth is typically limited by the mechanical vibrations, which can lead to feedback loop stability problems, if they are not explicitly considered in the control law design. The research in this thesis aims at overcoming the limitations posed by a feed drive’s structural vibrations, through detailed modeling, dynamic model estimation, and advanced motion controller design with active vibration damping capability, in order to achieve improved disturbance rejection near the cutting force application point (i.e., load side), as well as high accuracy motion tracking. Thus, the achieved contributions and results can be summarized as follows: 1. A new frequency-domain Multi-Input Multi-Output (MIMO) system identification algorithm has been developed and validated, which is suitable for mechatronic motion delivery systems with LTI dynamics. The new algorithm can capture both the effects of lightly damped modes (coming from the mechanical structure) as well as other highly damped dynamics. The proposed algorithm is able to achieve pole commonality across multiple output-input channels. In benchmarks conducted with experimental MIMO frequency response data, the proposed algorithm has been able to demonstrate 1-2 orders of improvement over other MIMO model fitting algorithms, such as modalfit and tfest available in MATLAB. 2. The disturbance rejection capability of a ball-screw drive has been enhanced through active damping of multiple vibration modes. In the best of the author’s knowledge, this thesis is the first time that successful active damping of multiple vibration modes has been demonstrated experimentally for a ball-screw drive. The proposed methodology is based on applying H2/H∞ synthesis to damp vibrations and further improve the position tracking using loop-shaping, in conjunction with suitable feedforward terms. In experimental benchmarks, the new designs have demonstrated, for wide frequency ranges, 2…3× better disturbance rejection compared to other control techniques, such as P-PI position-velocity cascade (used extensively in industry) and pole-placement control (PPC, proposed earlier in research). The proposed designs have also achieved 2.5× better damping of the most significant axial vibration mode, which is the common weak point in ball-screw mechanisms. The achieved tracking performance is comparable to that of PPC, and better than that of P-PI, maintaining <10 microns of dynamic accuracy under 420 mm/s velocity and 0.12 g acceleration conditions. However, proposed controller design requires expert knowledge and interaction. Thus, further development is needed before it can be used safely and effectively in industry. 3. A robust Adaptive Feedforward Cancellation (AFC) framework has been proposed for the mitigating harmonic (oscillatory) positioning errors which occur in ball-screw drives, due to mechanism and sensor imperfections, misalignment, and repetitive disturbances (e.g., cutting forces). In this contribution, a new methodology has been developed for adopting the multi-resonator AFC design to the dual-feedback structure of ball-screw drives. The methodology allows for the performance degradation outside the target compensation frequencies of the resonators to be quantified and capped, while guaranteeing the robust stability requirements from the point of view of the vector (i.e., inverse closed-loop sensitivity) margin. To achieve the above listed contributions, detailed modeling, experimental identification, controller design, and testing were also undertaken extensively, and documented in detail throughout the relevant chapters of this thesis, to facilitate the reproducibility of the results as much as possible.