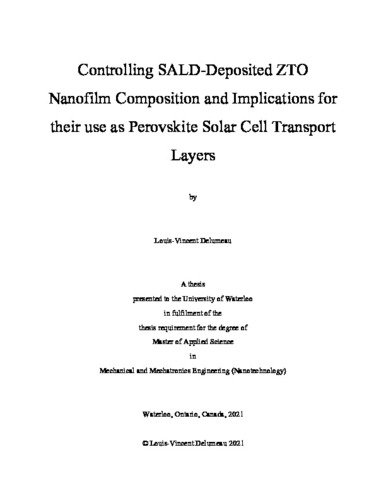 This thesis is concerned with the study of new nanofilm electron transport layers for use in perovskite solar cells, one of the thin film solar cell technologies in the research and very early commercial phases. Spatial atomic layer deposition (SALD) is a method of nanofilm growth that is particularly well-suited to metal oxide fabrication, yielding high-quality uniform films in less time and without the cumbersome vacuum requirements of conventional atomic layer deposition. An important attribute of a performant electron transport layer is the appropriate matching of its conduction and valence band energy levels to those of the perovskite in contact with it, to favour electron extraction into the transport layer and prevent the entry of holes. Different absorber layers, with lead halide perovskites as only one example, will exhibit different energy levels; thus being able to tune the bandgap of the transport layer to better match the specific perovskite or other light absorber layer in use is very useful to be able to optimise a variety of solar cell designs for commercialisation. This was investigated in the context of zinc-tin oxide, a mixture of two of the most praised metal oxide electron transport layers for perovskite cells - ZnO and SnO2. The hope was that the bandgap of zinc-tin oxide, as deposited by SALD using an ozone-oxygen mixture, would vary with the Sn content (or Sn atom concentration relative to total metal atom concentration). Zinc-tin oxide was grown for the first time with SALD using different reactor head slits for each of the precursors - TDMASn and DEZ. For the oxide produced using the deposition conditions and compositions from this study, there is doubt as to whether a clear bandgap correlation with film composition was found, yet the results do point to other deposition conditions or post-deposition heat treatments that are likeliest to allow bandgap engineering, if such a relationship is valid for zinc-tin oxide. A wider range of zinc-tin oxide compositions by SALD was reported in this study than ever before (28% to 97% Sn content), and a detailed theory explaining the relationship between the deposition conditions and Sn content of the films is put forward, suggesting Sn and Zn precursor flow rates to be selected according to the desired film composition. Nor was a clear trend with composition identified for as-deposited films for transmittance, refractive index, defect and majority carrier densities, or film morphology. Photoluminescence quenching to compare the electron extraction efficiencies of different oxide compositions pointed to an Sn content of 97% being least effective. Atomic layer depositions straight onto perovskite are confirmed to be completely incompatible with the use of ozone as the oxidiser.