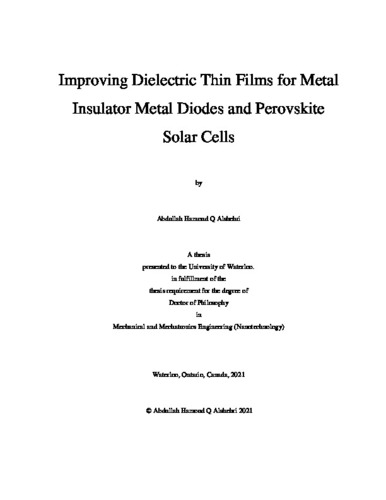 Metal-insulator-metal (MIM) diodes are nano-electronic devices that operate by quantum tunneling of electrons through a thin dielectric layer to rectify high frequency alternating current (AC) to usable direct current (DC). Despite the crucial role played by the insulating layers, dielectric films for MIM diodes have not been thoroughly optimized. In this thesis, three fabrication techniques are explored to improve dielectric films for MIM diodes; doping of the insulator layer, using a rapid, scalable, open-air technique to deposit the insulator and the introduction of a thickness gradient. Metal-insulator-insulator-metal (MIIM) diodes based on nitrogen-doped titanium dioxide (NTiOx) and aluminum oxide (NAlOx) are fabricated by plasma-assisted atomic layer deposition. The doped MIIM diodes show higher performance than diodes with undoped insulators due to the introduction of defect-mediated conduction mechanisms. A Pt/TiOx-NAlOx/Pt diode shows an asymmetry of 8.76 × 103, nonlinearity of 4, and zero-bias responsivity of 36.8 A W−1. MIM diodes are then fabricated by atmospheric pressure chemical vapor deposition (AP-CVD), demonstrating that clean room fabrication is not a prerequisite for quantum-enabled devices. The MIM diodes fabricated by AP-CVD show a lower effective barrier height, lower turn on voltage, lower zero-bias resistance, and better asymmetry than similar diodes made by plasma-enhanced atomic layer deposition. An atmospheric pressure spatial atomic layer deposition (AP-SALD) system is then used to produce spatially varying chemical vapor deposition rates on the order of angstroms per second. An Al2O3 film is printed with nm-scale thickness gradients in as little as 45 s and used for combinatorial and high-throughput (CHT) analysis of MIM diodes. By testing 360 Pt/Al2O3/Al diodes with 18 different Al2O3 thicknesses on a single substrate, the insulator thickness (6.5 to 7.0 nm) for optimal diode performance is determined. A double thickness gradient metal-insulator-insulator-metal diode is then fabricated by AP-CVD for the first time. This high-throughput method is used to produce 414 MIIM diodes with 414 different Al2O3/ZnO film-thickness combinations on a single substrate. The nm-scale Al2O3/ZnO films are printed in only 2 minutes and the entire device fabrication takes 7 h, much less than conventional approaches for studying a large number of insulator-thickness combinations. High performance diodes (asymmetry = 2580, nonlinearity= 13.1 and responsivity=12 A/W) are observed when a resonant tunneling mechanism is dominant for insulator thicknesses of 7.4 nm (Al2O3) and 3.4-4.4 nm (ZnO). Finally, to demonstrate the applicability of the CHT approach to other devices, an Al2O3 thickness gradient thin film encapsulation layer is deposited by AP-CVD on a perovskite solar cell stack for the first time and a convolutional neural network is used to analyze the perovskite stability. The rapid nature of AP-CVD enables thicker films to be deposited at a higher temperature than is practical with conventional methods. The CHT analysis shows enhanced stability for 70 nm encapsulation films. The stability of the combinatorial perovskite solar cells is observed over 94 hours and shows the efficacy of thicker encapsulation layers.