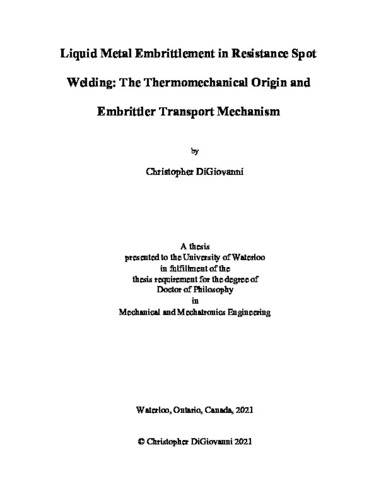 To increase fuel economy, demand for lighter vehicles by way of thinner parts has risen in recent years. As parts become thinner the vehicle safety cannot be comprised, leading to the development of advanced high strength steels (AHSS) which exhibit excellent strength and ductility. AHSS are often coated with zinc (Zn) to prevent corrosion, however the coating can lead to several complications, such as liquid metal embrittlement (LME). Resistance spot welding (RSW), a common automotive process, has been observed to accentuate LME cracking. During RSW, the heat buildup at the weld surface is sufficient to melt the Zn coating, leading to LME. Presently, LME cracks that are detrimental to joint integrity are undefined and thus hard to target for mitigation. Furthermore, the exact sources of stress (a prerequisite for LME) during the RSW process leading to detrimental crack formation, remains unclear. Hence, a comprehensive understanding of LME occurrence calls for an in-depth analysis of the thermomechanical aspects of the RSW process and the fundamental mechanisms leading to the onset of LME. This research aims to define, mitigate, and explain the occurrence of LME cracks during RSW. Lap shear static strength testing was used to determine the effect of LME cracks on joint performance. Detrimental cracks were defined according to their size and location. RSW process adjustments were carried out to mitigate detrimental LME cracks. It was determined that the mechanism of formation varies depending on the region the crack is located. Furthermore, it was found that the occurrence of LME in all cases was largely driven by the presence of stress. To isolate the effects of stress and temperature on the occurrence of LME, elevated temperature tensile testing was carried out using conditions that best replicate the RSW process. A co-dependence of temperature and stress for the onset of LME was observed, showing the temperature range for LME is not static as previously thought. Using interrupted testing, the onset of LME was observed in detail. Zn penetration to the AHSS grain boundaries was observed to increase with increasing applied stress until LME crack formation. A diffusion analysis revealed the fundamental LME transport mechanism to be stress-assisted grain boundary diffusion. This mechanism reconciles the observations of LME in RSW, which showed the occurrence of LME to be highly dependent on both temperature and stress.