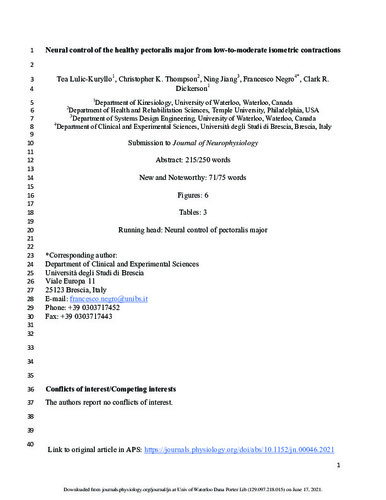 The pectoralis major critically enables arm movement in several directions. However, its neural control remains unknown. High-density electromyography (HD-sEMG) was acquired from the pectoralis major in two sets of experiments in healthy young adults. Participants performed ramp-and-hold isometric contractions in: adduction, internal rotation, flexion, and horizontal adduction at three force levels: 15%, 25%, and 50% scaled to task-specific maximal voluntary force (MVF). HD-sEMG signals were decomposed into motor unit spike trains using a convolutive blind source separation algorithm and matched across force levels using a motor unit matching algorithm. The mean discharge rate and coefficient of variation were quantified across the hold and compared between 15% and 25% MVF across all tasks, whereas comparisons between 25% and 50% MVF were made where available. Mean motor unit discharge rate was not significantly different between 15% and 25% MVF (all P > 0.05) across all tasks or between 25% and 50% MVF in horizontal adduction (P = 0.11), indicating an apparent saturation across force levels and the absence of rate coding. These findings suggest that the pectoralis major likely relies on motor unit recruitment to increase force, providing first-line evidence of motor unit recruitment in this muscle and paving the way for more deliberate investigations of the pectoralis major involvement in shoulder function.