Modeling and Simulation of Lower Limb Spasticity in Motor-Impaired Individuals 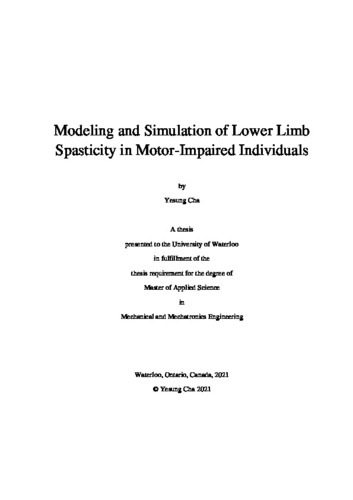 Spasticity is a symptom that impairs the ability to freely move and control one’s limbs through increased tone and involuntary activations in the muscles. It can cause pain and discomfort and interfere with daily life and activities such as walking. Spasticity is a result of upper motor neuron lesions and is seen commonly in survivors of stroke and brain trauma, and individuals with cerebral palsy, multiple sclerosis, and spinal cord injuries. Despite its ubiquity the phenomena is not well understood. However, the most referred to definition describes spasticity as “a velocity-dependent increase in tonic stretch reflexes with exaggerated tendon jerks, resulting from hyper-excitability of the stretch reflexes.” Qualitative, subjective measures are commonly used in the clinical setting to assess spasticity, most notably the Modified Ashworth score, which has been shown to have inconsistent reliability, relying heavily on the examiner’s experience, and is inaccurate for the lower limbs. Furthermore, these subjective scores do not account for the velocity-dependence of spasticity, which is a key differentiator against other symptoms such as rigidity. Consequently, there is a need for an objective measure of spasticity that can provide a more accurate and reliable alternative or supplement to the current clinical practice, in order to improve the evaluation of treatment and rehabilitation for spasticity. To address this need, a system was developed, validated and applied for modeling the spasticity in the lower-limbs of an affected individual. An experimental setup consisted of a brace-handle system with integrated force sensors for passive actuation of each leg segment, stretching spastic muscles to assess the severity of the condition. The setup included wearable sensors sEMG and IMUs – recording muscular activity and limb segment kinematics respectively during these motions. From the data, onsets of muscular activity and subsequently the trigger points of spastic reflexes were identified, which were mapped onto the calculated joint kinematics. Based on threshold-control theory, stretch reflex threshold (SRT) models of spasticity were created for each muscle by plotting the joint velocities and positions and using regression analysis to create a dynamic threshold in the kinematic space that divided the regimes of spastic and non-spastic motion. These muscle-specific models were combined by muscle groups, leading to the creation of a novel, data-based measure that characterizes the severity of spasticity of a group of muscles. The models and measures were found to agree with the expected changes from different conditions of muscle stretch, and different levels of spasticity in the included subjects, but required more data for statistical validation. The muscle-specific models were then implemented in a spasticity controller developed for use in neuromuscular simulations, in addition to further modeling of spastic reflex characteristics. The controller was applied in a scenario simulation of the same passive movement spasticity assessments used to collect the original data, which provided additional validation of the methodology and results of the modeling. The spasticity controller was also applied in a previously developed reinforcement-learning walking agent, to see the effects of spasticity on simulated gait. Following modification and training of the new agents, the spatio-temporal parameters of gait were analyzed to determine the differences in healthy and spastic gait, which agreed with expectations and further validated the spasticity modeling. This thesis presents a system to accurately and reliably model spasticity, establishing a novel, objective measure to better characterize spasticity, validating it through demonstrations of its use that may be extended in future work to accomplish better understanding of spasticity and provide invaluable improvements to the lives of affected individuals through practical applications.