Analysis of Facial Emotional Characteristics: Impact of Culture and Gender 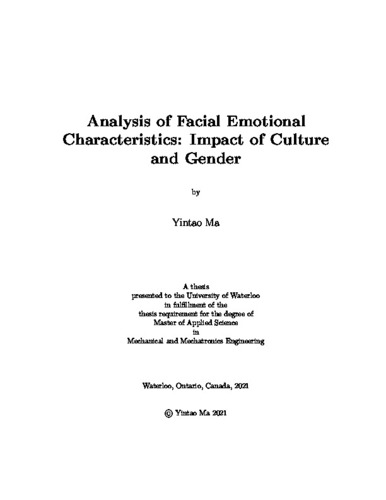 Emotional expressions are considered universal for a long time. However, some evidence indicates that there are gender and cultural specific variations in emotional expressions, which leads to inaccurate recognition result in the emotion recognition system. Therefore, this thesis aims to identify the particular cultural and gender variation in basic facial expressions (disgust, fear, happiness, surprise, and sad) in terms of action units that are defined by the facial action coding system (FACS). A logit regression is conducted with each emotion's action unit as an independent variable and race (Caucasian and Asian) as the dependent variable. The result reveals that each emotion expression's specific action units in Caucasian and East Asian are different. This thesis also constructs four average faces regarding culture and gender to evaluate the gender variability of action unit intensity in the same cultural group. The finding indicates less distinction in Caucasian facial behaviors compared with Asian, and women are generally more expressive than men.