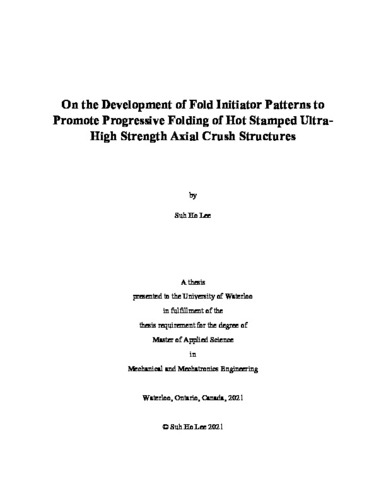 The effect of fold initiator design on the performance of axial crush rails fabricated using ultra high strength steels (UHSS) is examined in a combined experimental-numerical-analytical study. Of particular interest is the effect of fold initiator pattern and spacing in promoting stable folding. A key factor in introducing UHSS into energy absorbing components is the loss of ductility with increases in strength. Thus, the effect of material fracture limit on the ability of crush structures to fold is also considered. The UHSS steel grade considered for the majority of this research (and all of the experiments) was hot stamped Ductibor® 1000-AS, with a thickness of 1.2 or 1.6 mm and tensile strength of 1000 MPa. In addition, performance metrics, developed as part of this research, are applied to a broader range of steel grades spanning strengths in the range of 270-1500 MPa. Ductibor® 1000-AS double hat sections were hot stamped, spot welded and tested in axial crush under quasi-static and dynamic loading conditions. A baseline fold initiator pattern was first evaluated on axial crush rails that incorporated rudimentary single initiators indented on two opposing faces. Dynamic crush tests considering this baseline pattern repeatedly showed a global buckling mode, parent metal fracture and spot weld failure. The numerical models demonstrated close agreement with the observed buckling and failure modes and the measured force-displacement response. Following these baseline results, a numerical parametric study was undertaken to evaluate the effect of six different fold initiator patterns on the dynamic axial crush response. These patterns consider different design variables such as fold initiator location, sequence, orientation, spacing and symmetry. The progressive folding mode was predicted for three of the six patterns considered. The most stable pattern corresponded to that identified by Wierzbicki and Abramowicz (1983) within their Superfolding Element analysis. This pattern utilizes fold initiators placed on the channel section faces and flanges in an alternating fashion to promote a rolling (serpentine) collapse of the flange. The effect of fold initiator spacing on stability (for the most stable initiator pattern) was further examined for each sheet thickness. The numerical models revealed a strong dependence on initiator spacing and served to identify a specific initiator spacing for each thickness that resulted in stable folding and largely suppressed fracture within the tight folds that form during axial crush; moreover, these initiator spacing values agreed well with those predicted using the analytical model of Wierzbicki and Abramowicz (1983). Experimental assessment of the model predictions was undertaken by performing quasi-static and dynamic axial crush experiments for a subset of the parametric cases comprising the baseline and stable folding initiator patterns and a range of initiator spacing. In general, the crush response of the 1.6 mm specimens agreed extremely well with the model predictions and served to validate the predicted effect of fold initiator pattern and spacing on folding stability and fracture suppression. The 1.2 mm specimens exhibited a global buckling instability that was not predicted by the numerical models. The cause of this instability was attributed to the fold initiator forming process which resulted in significant distortion of the cross-section and a loss of buckling resistance. Subsequent numerical models that combined detailed simulation of the indentation process and mapped the forming predictions onto the crush simulations were able to capture the observed buckling response. As part of the continued analysis of axial crush results, three metrics were developed to predict axial crush performance and potentially serve as design tools for screening material selection and initiator design. One metric, termed the “Relative Bending Limit,” was derived from the ratio of the measured plastic work in V-bend fracture characterization tests to the predicted plastic work in the Superfolding Element analysis. This metric was successfully demonstrated to be a predictor of the fracture extent observed in crush columns made of different materials. Another metric, termed the “Folding Transition Indicator,” was derived from the ratio of the measured slenderness ratio of the crush specimens to the theoretical critical slenderness ratio. The metric strongly reflected the various collapse modes observed in these axial columns. By plotting the two metrics on the same graph, a 2D response map was constructed that successfully captured the overall trends in the fracture extent vs. deformation mode response. This research demonstrates that the analytical design approach in configuring fold initiator patterns has significant potential in promoting progressive folding in hot stamped UHSS. By adopting a carefully designed fold initiator pattern and analytically determined fold initiator spacing, improved folding stability was achieved without significant sacrifice in absorbed energy. The results support the application of Ductibor® 1000-AS in frontal crush structures, but point to the need for considerable care in design of fold initiators for which the current performance metrics should serve as design tools. The current findings are tempered by the fact the axial crush specimens, particularly the thinner 1.2 mm samples, were subject to shape distortion due to the indentation method in producing the fold initiators. In future work, as well as in industrial hot stamping practice, these specimens should be fabricated with fold initiators integrated within the hot stamping dies in order to limit distortion and further improve the axial crush performance of hot stamped Ductibor® 1000-AS components.