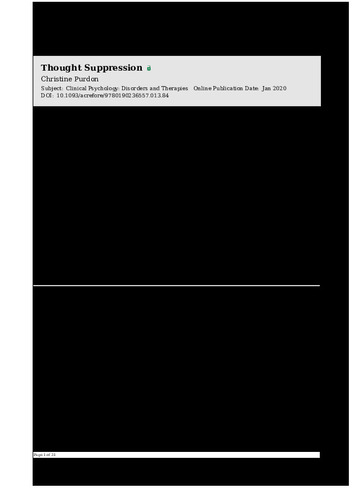 The idea that suppressing an unwanted thought results in an ironic increase in its frequency is accepted as psychological fact. Wegner’s ironic processes model has been applied to understanding the development and persistence of mood, anxiety, and other difficulties. However, results are highly inconsistent and heavily influenced by experimental artifact. There are a substantial number of methodological considerations and issues that may underlie the inconsistent findings in the literature. These include the internal and external validity of the paradigms used to study thought suppression, conceptual issues such as what constitutes a thought, and consideration of participants’ history with and motivation to suppress the target thought. Paradigms that study the products of failed suppression, such as facilitated recall and attentional deployment to thought relevant stimuli may have greater validity. It is argued that a shift from conceptualizing the persistence of unwanted thoughts as products of failed suppression and instead as internal threat stimuli may have merit.