Late-universe signals in the microwave sky: extragalactic dust, electrons, and other baryonic effects 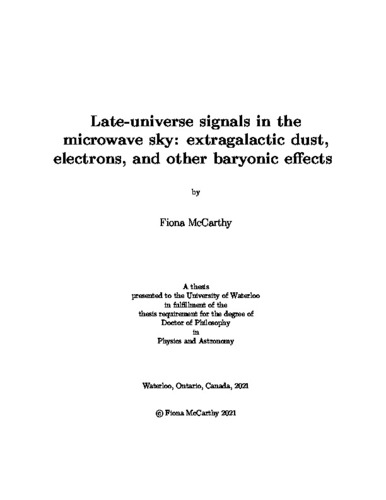 This thesis collects much of the work I have done over the last four years as a PhD student. It has two focuses. Part 1 discusses gravitational radiation emitted from two maximally charged black holes in Einstein--Maxwell--dilaton theory, while Part 2 focuses on cosmological probes of late-universe physics. Black holes are some of the most interesting solutions to Einstein's equations, the equations that govern the curvature of the spacetime we inhabit. The gravitational field around them is stronger than around any other astrophysical object, and the interaction of two black holes can cause strong disturbances in the spacetime, leading to the radiation of gravitational waves. Gravitational radiation is usually a complex problem that must be studied numerically, and analytic solutions are rare. However, in Einstein--Maxwell (EM) theory, where the Einstein equations are supplemented with the Maxwell equations governing the behaviour of electromagnetic fields, there exists a configuration of black holes which have electric charge which causes a repulsive force that counteracts their gravitational attraction. These black holes can be evolved quasi-statically leading to gravitational radiation that can be analytically approximated. In Chapter 3 of this thesis we analytically approximate the radiation when the EM equations are further supplemented with a dilaton (scalar) field. The second part of this thesis relates to work I have done in relation to late-universe probes and secondary cosmic microwave background (CMB) effects, in particular motivated by the upcoming Simons Observatory and CMB-S4 CMB surveys. The CMB has been detected and mapped with exquisite detail by the Planck satellite on arcminute scales, and these experiments will extend to even smaller angular scales. In this regime ``secondary'' effects sourced in the late universe will dominate, in particular CMB lensing due to large masses and the interaction of the CMB with electrons (the Sunyaev--Zel'dovich effect). We also get closer to the regime in which the cosmic infrared background (CIB), sourced by thermal radiation from dust in star-forming galaxies, starts to dominate over the CMB. Robust and consistent modelling is required to understand how the different signals relate to and correlate with each other. In this thesis we consider how various combinations of these phenomena correlate in different ways. Chapter 7 discusses how the correlation between CMB lensing and the CIB can be used to improve models of the latter. Chapter 8 discusses how CIB maps can be combined with Sunyaev--Zel'dovich probes to reconstruct the velocity field of the universe on the largest scales. In Chapters 9 and 10 we discuss how complex late-universe interactions can bias the inference of fundamental physics from the CMB lensing and lensed CMB maps, and develop several mitigation methods to ensure unbiased inference.