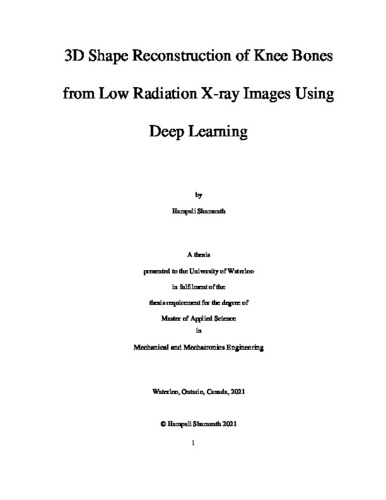 Understanding the bone kinematics of the human knee during dynamic motions is necessary to evaluate the pathological conditions, design knee prosthesis, orthosis and surgical treatments such as knee arthroplasty. Also, knee bone kinematics is essential to assess the biofidelity of the computational models. Kinematics of the human knee has been reported in the literature either using in vitro or in vivo methodologies. In vivo methodology is widely preferred due to biomechanical accuracies. However, it is challenging to obtain the kinematic data in vivo due to limitations in existing methods. One of the several existing methods used in such application is using X-ray fluoroscopy imaging, which allows for the non-invasive quantification of bone kinematics. In the fluoroscopy imaging method, due to procedural simplicity and low radiation exposure, single-plane fluoroscopy (SF) is the preferred tool to study the in vivo kinematics of the knee joint. Evaluation of the three-dimensional (3D) kinematics from the SF imagery is possible only if prior knowledge of the shape of the knee bones is available. The standard technique for acquiring the knee shape is to either segment Magnetic Resonance (MR) images, which is expensive to procure, or Computed Tomography (CT) images, which exposes the subjects to a heavy dose of ionizing radiation. Additionally, both the segmentation procedures are time-consuming and labour-intensive. An alternative technique that is rarely used is to reconstruct the knee shape from the SF images. It is less expensive than MR imaging, exposes the subjects to relatively lower radiation than CT imaging, and since the kinematic study and the shape reconstruction could be carried out using the same device, it could save a considerable amount of time for the researchers and the subjects. However, due to low exposure levels, SF images are often characterized by a low signal-to-noise ratio, making it difficult to extract the required information to reconstruct the shape accurately. In comparison to conventional X-ray images, SF images are of lower quality and have less detail. Additionally, existing methods for reconstructing the shape of the knee remain generally inconvenient since they need a highly controlled system: images must be captured from a calibrated device, care must be taken while positioning the subject's knee in the X-ray field to ensure image consistency, and user intervention and expert knowledge is required for 3D reconstruction. In an attempt to simplify the existing process, this thesis proposes a new methodology to reconstruct the 3D shape of the knee bones from multiple uncalibrated SF images using deep learning. During the image acquisition using the SF, the subjects in this approach can freely rotate their leg (in a fully extended, knee-locked position), resulting in several images captured in arbitrary poses. Relevant features are extracted from these images using a novel feature extraction technique before feeding it to a custom-built Convolutional Neural Network (CNN). The network, without further optimization, directly outputs a meshed 3D surface model of the subject's knee joint. The whole procedure could be completed in a few minutes. The robust feature extraction technique can effectively extract relevant information from a range of image qualities. When tested on eight unseen sets of SF images with known true geometry, the network reconstructed knee shape models with a shape error (RMSE) of 1.91± 0.30 mm for the femur, 2.3± 0.36 mm for the tibia and 3.3± 0.53 mm for the patella. The error was calculated after rigidly aligning (scale, rotation, and translation) each of the reconstructed shape models with the corresponding known true geometry (obtained through MRI segmentation). Based on a previous study that examined the influence of reconstructed shape accuracy on the precision of the evaluation of tibiofemoral kinematics, the shape accuracy of the proposed methodology might be adequate to precisely track the bone kinematics, although further investigation is required.