Applications of Reflectometry Towards the Development of MEMS Gas Sensors 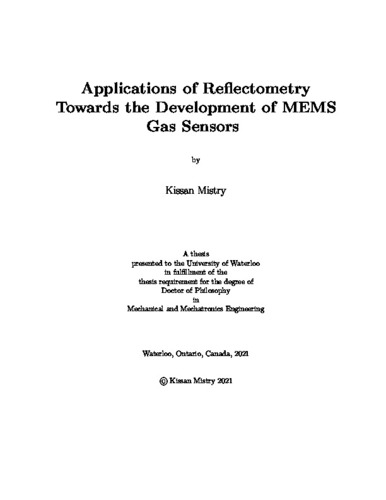 Reflectometry or reflectance spectroscopy is a relatively simple characterization technique based on the analysis of reflected light from a surface. Herein, reflectometry is used to attain significant insights towards the development of micro-electro-mechanical systems (MEMS) based gas sensors. Two main reflectometry applications are demonstrated which led to formation of unique MEMS gas sensor devices. The first application was the use of in-situ reflectance spectroscopy to characterize the growth behavior of metal oxide films grown by atmospheric pressure-spatial atomic layer deposition. The technique revealed an initial film nucleation period, where the length of the nucleation time was sensitive to the deposition process parameters. The in-situ reflectometry technique was then used to study and monitor the growth behavior of metal oxide films on various non-conventional surfaces. Doing so allowed for the accurate deposition of zinc oxide films on a variety of surfaces with desired thickness. This was instrumental, as it enabled the integration of the zinc oxide films into a novel MEMS resonant cantilever architecture for gas sensing. In this device, the zinc oxide layer serves as both the cantilever structural layer as well as the gas sensitive receptor layer. A key advantage of the approach was the reduction in overall mass of the cantilever which can lead to an enhancement in sensitivity to low quantities of analyte gases. The sensor had an outstanding sensitivity to low levels of relatively humidity(RH) when compared to other frequency shift-based humidity sensors. The zinc oxide cantilever demonstrated a sensitivity of 23649 ppm⁄%RH at 5.9 % RH and an average sensitivity of 1556 ppm⁄%RH in the range of 30-60% RH. The second application of reflectometry was its use as a screening technique to find suitable gas sensitive receptor materials for static deflection type MEMS gas sensors. The reflectance intensity of various materials exposed to gases, was monitored, where changes in the intensity indicated that the material was physically changing in the presence of the gas. This expansion behavior is ideal for static deflection type MEMS gas sensors such as the nanomechanical membrane type surface stress sensor (MSS) architecture. The reflectance screening technique identified that laser treated two dimension materials such as graphene oxide, molybdenum disulfide and tungsten disulfide were suitable candidates to be integrated as the receptor layer in the MSS platform. The sensing response of the coated devices was obtained for a select group of volatile organic compounds. The results showed that the laser treatment technique was advantageous to enhancing the sensor response and sensitivity, as it introduces defects, dopants and functional groups to the receptor materials for improved gas adsorption.