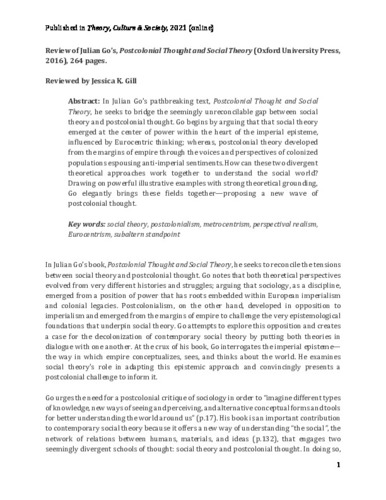 In Julian Go’s pathbreaking text, Postcolonial Thought and Social Theory, he seeks to bridge the seemingly unreconcilable gap between social theory and postcolonial thought. Go begins by arguing that that social theory emerged at the center of power within the heart of the imperial episteme, influenced by Eurocentric thinking; whereas, postcolonial theory developed from the margins of empire through the voices and perspectives of colonized populations espousing anti-imperial sentiments. How can these two divergent theoretical approaches work together to understand the social world? Drawing on powerful illustrative examples with strong theoretical grounding, Go elegantly brings these fields together—proposing a new wave of postcolonial thought.