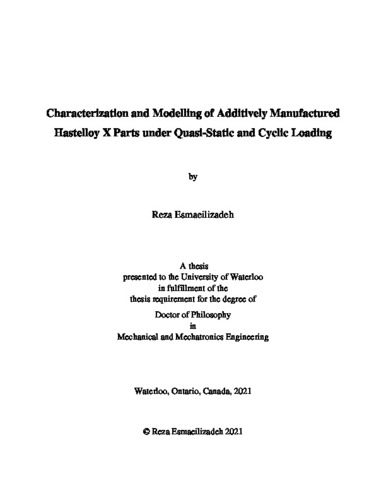 Laser powder-bed fusion (LPBF) is one of the main additive manufacturing (AM) methods, which has been proven to produce complex metallic parts with fine features. Understanding the correlation of process parameters to the microstructure and mechanical properties of the printed parts are one of the biggest challenges in the AM community. In this thesis, the manufacturability, performance and durability of LPBF Hastelloy X (HX) parts are investigated under quasi-static and cyclic loading. To this end, the variation of density and surface roughness using X-Ray computed tomography and laser confocal profilometry respectively, were studied across the build plate to find the optimal region on the build plate for printing to minimize the variability of the printed samples. After obtaining the best possible location for the least amount of scatter in the parts’ properties, the effects of manufacturing process parameters on the printed parts were of prime importance. As the laser scanning speed (LSS) has been shown to be one of the most significant process parameters in LPBF, the effects of LSS on the macro/microstructure using optical and electron microscopy on the printed parts were also studied. Grain structure of the LPBF parts was studied using electron back scattered diffraction (EBSD). Although, quasi-static properties of the LPBF parts have been found to be superior to the conventionally manufactured (CM) parts, their performance under cyclic loading has yet to be fully investigated. Such investigation is critical since HX components used in combustor liner and fuel nozzle are under fluctuating loads in real life applications. Moreover, it has been found that the volume fraction of defects and surface roughness of AM is more than CM. The effect of defects on fatigue performance can be minimized by choosing proper combination of process parameters. Reaching the proper combination of manufacturing conditions for acceptable performance under fatigue loading will bring the next step, which is the ability to predict the life under cyclic loading. Strain-controlled fatigue tests using servo-hydraulic frames were performed to investigate the proper fatigue modelling approach for the LPBF-HX samples. Finally, the fracture surfaces of the fatigue samples were analyzed using scanning electron microscope (SEM) to investigate the crack initiation and propagation steps. It was concluded that the spatter generation, which is inevitable in LPBF process, affects the powder bed characteristics and spatter distribution, which is highly dependent on the machine architecture, causes a significant variability between parts printed on different locations. It was vi found that spatter rich region is formed close to the gas outlet and contains parts with inferior surface roughness and larger porosities. Moreover, porous parts were manufactured at extremely high and low values of LSS and in the moderate LSS values, nearly full dense parts were obtained. At the nearly full dense processing window of LPBF-HX parts, the quasi-static properties are dependent on the microstructure, which is affected by the LSS. Parts printed with lower LSS in the nearly full dense window possess longer lives in low-cycle fatigue (LCF) tests due to smaller pre-strain damage and hysteresis stabilization at lower strains. On the other hand, higher LSS parts perform better in high-cycle fatigue (HCF) region where surface roughness plays an important role. Strain- and energy-based fatigue models were able to predict the fatigue lives under different loading conditions and fatigue design curves were constructed for strain and energy models.