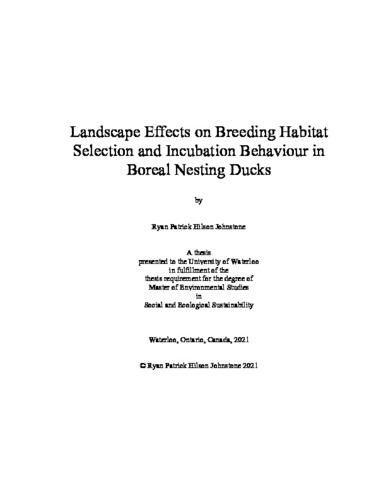 Canada’s western boreal forest is the second most important breeding area for North American duck populations. Over the last several decades, this region has experienced a considerable expansion of industrial development that has drastically altered the structure of the landscape. Duck populations in North America are a significant and sought-after game species and thus require effective conservation and management. There is relatively limited research regarding boreal duck ecology and the impacts of industrial development on ducks breeding in this region remain largely unexplored. We investigated the effects of land cover and land use on second and third order habitat selection in boreal breeding female Mallards (Anas platyrhynchos). In addition, we developed a new method to identify nest attendance patterns, and applied this method to quantify incubation behaviour (i.e., daily recess frequency, duration, and incubation constancy) in four species of ground nesting ducks across a gradient of land cover and land use types. We modelled the effects of land cover, land use, and weather on incubation behaviour at the micro (i.e., nest site) and macro (i.e., home range) scale. We found that breeding female Mallards established home ranges with greater proportions of marsh habitat, graminoid fens, and well pads. Within their home ranges, female Mallards selected shrub swamps, marsh, graminoid fens, well pads, and borrow pits. Female Mallards also selected habitats that were close to roads and pipelines. Additionally, land cover, land use, and weather influenced incubation behaviour, and our results suggested that boreal nesting ducks took more recesses per day in response to greater densities of secondary roads and proportions of marsh habitat surrounding the nest. Overall, our results suggested that breeding Mallards selected and avoided a combination of land cover and land use features when establishing home ranges and selecting habitats within the home range. In addition, the relationships between incubation behaviour in upland nesting ducks and land cover, land use, and weather are equivocal, requiring further investigation. Our research addressed important questions concerning ducks’ behavioural response to the natural features and industrial development during the breeding period. With the expected continuation of industrial development in the boreal forest, this information is vital. It will serve as a baseline for future habitat selection and incubation research in the region; and, assist managers when making predictions about waterfowl population trajectories in the boreal and other ecosystems experiencing similar habitat changes.