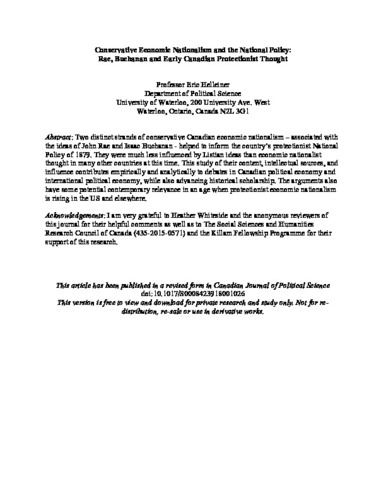 Two distinct strands of conservative Canadian economic nationalism—associated with the ideas of John Rae and Isaac Buchanan—helped to inform the country’s protectionist National Policy of 1879. These strands of nationalism were much less influenced by Listian ideas than was economic nationalist thought in many other countries at this time. This study of their content, intellectual sources and influence contributes empirically and analytically to debates in Canadian political economy and international political economy, while also advancing historical scholarship. The arguments also have some potential contemporary relevance in an age when protectionist economic nationalism is rising in the US and elsewhere.