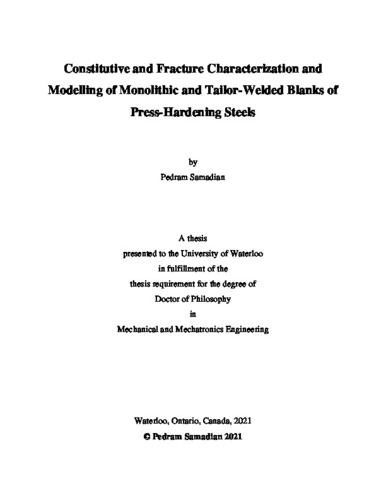 This study investigates the constitutive (flow) and fracture response of two automotive-grade press-hardening steels, Usibor® 1500-AS and Ductibor® 500-AS, as well as their tailor-welded blanks (TWBs), for a range of as-quenched microstructures. Three different microstructures of each steel grade were developed through various quench-hardening heat treatments, comprising austenitization followed by air, die, oil, and/or water cooling. Mono- and multi-gauge laser-welded blanks of Usibor® 1500-AS and Ductibor® 500-AS, with three distinct combinations of 1.2-mm and 1.6-mm thicknesses, were also produced in the die-quenched condition. For the as-quenched Usibor® 1500-AS and Ductibor® 500-AS monolithic blanks, characterization campaigns were conducted by means of mechanical tests, including shear, hole expansion, uniaxial tension, V-bend, and plane-strain and equibiaxial tension Nakazima domes. Both steel grades exhibited a high degree of sensitivity to cooling rate in terms of mechanical properties. For Usibor® 1500-AS, the fully-martensitic (oil-cooled) and fully-bainitic (air-cooled) microstructures had the highest strength and ductility, respectively, while the bainitic-martensitic (forced air-cooled) microstructure exhibited intermediate mechanical properties. For Ductibor® 500-AS, the mostly-martensitic (water-cooled) microstructure showed the highest strength and lowest ductility, followed by the intermediate ferritic-martensitic plus tempered martensite/bainite (die-cooled) and mostly-ferritic (air-cooled) microstructures, respectively. The mechanical response of the as-quenched microstructures of Usibor® 1500-AS and Ductibor® 500-AS was modelled using a novel, coupled micromechanical-phenomenological strategy. In this approach, the constitutive behavior of the multi-phase steels was predicted using new mean-field homogenization (MFH) techniques, denoted the Samadian-Butcher-Worswick (SBW) formulations, with or without considering carbon-partitioning effects. The fracture response was estimated by tracking damage accumulation within each constituent phase using the phenomenological Generalized Incremental Stress-State-dependent damage MOdel (GISSMO) based on the micro-scale stress and strain states calculated by the MFH models. The proposed modelling strategy was shown to accurately predict the flow curves, fracture strains, and fracture loci of the bainitic-martensitic Usibor® 1500-AS and ferritic-martensitic Ductibor® 500-AS for the range of micro-constituent volume fractions considered. The hot-stamped TWBs were subjected to tensile, equibiaxial tension Nakazima dome, and V-bend experiments with various weld orientations relative to the major principal stress direction. In the majority of the mechanical tests, fracture was initiated in one of the parent metals. Fracture initiation occurred in the Ductibor® 500-AS parent metal during the transverse tensile and equibiaxial tension Nakazima dome tests, whereas the Usibor® 1500-AS parent metal fractured in the longitudinal tensile and 45° and 90° V-bend tests. The only exception to the parent-metal failure was observed during the V-bend tests with the weld line lying on the punch-tip edge, for which fracture was initiated within the weld. Finite-element models of the TWB experiments were developed within the LS-DYNA software using either the measured or predicted constitutive properties and fracture loci of the parent metals. A mapping scheme was created to assign the mechanical properties of each region of the TWBs to the corresponding elements based upon the measured local hardness. Two scenarios were examined for the TWB models: (i) including and (ii) excluding the detailed variation of mechanical properties within the weld region. The predictions revealed that the inclusion of the narrow weld region of the laser-welded blanks within the hardness-mapped TWB models resulted in an improvement of the predictions in terms of the load-displacement response and fracture locations, as compared to the “without weld” scenario. A key outcome of this research was the quantification of the strong quench-rate sensitivity of the mechanical properties of Usibor® 1500-AS and Ductibor® 500-AS, which will affect their in-service (crash) performance after hot stamping. The developed modelling frameworks have direct application to predict the mechanical response of these steels and their TWBs subjected to hot-stamping processes in which quench rate: (i) is intentionally varied, such as within the tailored in-die heating technique; or (ii) naturally changes, for example, through fluctuations associated with the tooling temperature and contact pressure over time as well as transients during the startup and shutdown of production lines.