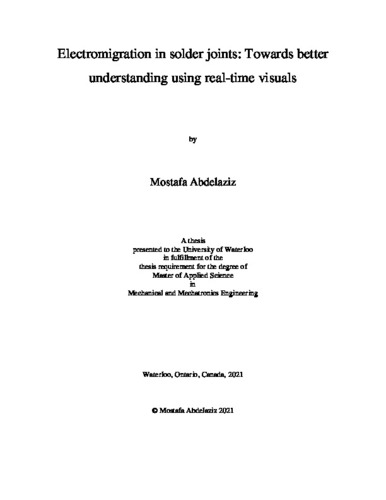 With the increasing demands and consequent miniaturization of electronic devices, electromigration is posing a challenge to the reliability not only of integrated circuits but also of the electronic packages. A methodology is reported that allows for quasi-continuous in-situ optical microscopic imaging of a cross-sectioned solder joint (sample) during testing for electromigration. This methodology is complemented with another approach that estimates the local temperature increase from Joule heating of the sample which allows for an appropriate temperature selection for the EM test to understand the contribution of failures from Joule heating. A SAC305 solder joint in a flip configuration was encapsulated in epoxy and cross-sectioned. Current stressing was applied to producing electromigration, with a theoretical current density in the range of (1.02 - 2.29) × 10⁴ A/cm². In-situ optical microscopic imaging and resistance measurements were performed simultaneously until an open circuit was observed. A crack and void started to form in an example experiment, and their evolution was recorded using the real-time imaging. The void and the crack continued growing until the end of current stressing. The void area at the cross-section grew to 1500 μm² while the crack grew to a length of 110 μm. After 330 h, the experiment was stopped as an open circuit occurred, which was preceded by a 10% rise of the resistance, indicating failure due to electromigration. During the end of the test, the test vehicle temperature increased by 20 °C as a result of increased Joule heating due to the loss in cross-sectional area of the solder joint. The location of the void did not agree with the expected current crowding location at the solder joint corner. It was inferred that the formation of cracks due to internal stresses prompted the formation of the void at that location that resulted in the open circuit, demonstrating the interconnection between the various failure mechanisms caused by EM. Microstructural changes were also monitored after the open circuit and were possibly due to the thermal stress occurring once the sample cooled down. Hillock formation and additional cracks were observed 30 min after the open circuit. The results highlight the unique capacity of real-time imaging to support more detailed electromigration research in solder joints by tracing the source of specific failure events. Additionally, cross-sectioning of samples for real-time visuals decreases the cross-sectional area and increases the current density, allowing for accelerated EM testing. Thus, the use of real-time visuals allows for accelerated tests which is helpful for studying EM under varying test conditions and comparing the reliability of different solder materials through a detailed analysis of the failure times.