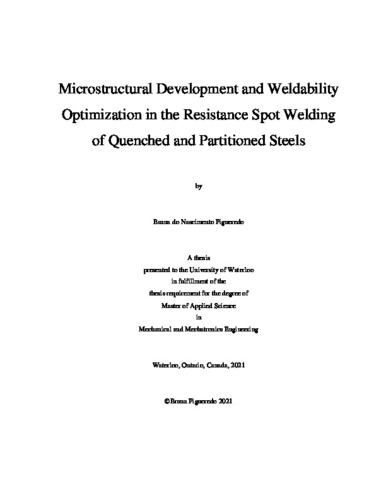 Advanced high-strength steels (AHSS) have been widely used in the automotive industry to meet the demand for reduced fuel consumption and environmental emissions. Quenching and Partitioning (Q&P) is a heat-treatment method used to produce AHSS with higher ductility than similar strength steels, allowing for the use of thinner and lighter automotive parts due to its high formability. The mechanism behind how the microstructure of the different weld zones affects Q&P steel welds' mechanical properties is a topic that is yet to be fully understood. In this study, the resistance spot welding behavior of Q&P steels was investigated through microstructure characterization, mechanical testing, failure behavior analysis, and computational simulation. It was found that the cross tension and tensile shear test samples all failed in a partial or full button pull-out mode, with an acceptable ductility ratio, but with lower cross tension strength compared to the available studies on resistance spot welding of Q&P steels. Fractography of the testing samples showed that the crack propagated along the fusion boundary, an occurrence previously reported in the literature for Q&P980, but with no comprehensive explanation regarding the mechanism behind the behavior. This work discusses how this fracture is possibly related to the formation of a softened region at the fusion boundary, a phenomenon commonly known as halo ring. Weldability optimization was analyzed using multiple pulsing welding schedules and the study of their effects on the microstructural development of the welds and their mechanical properties. It was found that a second pulse with a higher current than the primary pulse is effective in avoiding the occurrence of halo ring and improving cross-tension strength. Multi-pulsing consistently improved overall weld strength even when normalizing the values to decouple the effect of increased weld diameter. The relationship between the occurrence of halo ring and the weldability is discussed along with alternative theories correlating the microstructure and microhardness to the observed improvements. A computational simulation was applied to investigate the mechanism behind how the described multi-pulsing weld schedule eliminates the halo. It was found through the study of the thermal cycles in the weld that a high current second pulse effectively remelts the weld nugget, avoiding the fusion boundary to remain static towards the end of the welding cycle and thus not allowing for the formation of the softened zone.