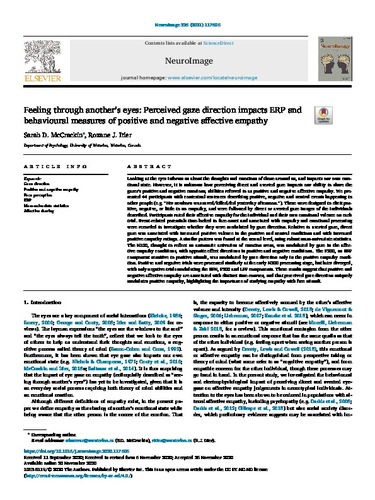 Looking at the eyes informs us about the thoughts and emotions of those around us, and impacts our own emotional state. However, it is unknown how perceiving direct and averted gaze impacts our ability to share the gazer's positive and negative emotions, abilities referred to as positive and negative affective empathy. We presented 44 participants with contextual sentences describing positive, negative and neutral events happening to other people (e.g. “Her newborn was saved/killed/fed yesterday afternoon.”). These were designed to elicit positive, negative, or little to no empathy, and were followed by direct or averted gaze images of the individuals described. Participants rated their affective empathy for the individual and their own emotional valence on each trial. Event-related potentials time-locked to face-onset and associated with empathy and emotional processing were recorded to investigate whether they were modulated by gaze direction. Relative to averted gaze, direct gaze was associated with increased positive valence in the positive and neutral conditions and with increased positive empathy ratings. A similar pattern was found at the neural level, using robust mass-univariate statistics. The N100, thought to reflect an automatic activation of emotion areas, was modulated by gaze in the affective empathy conditions, with opposite effect directions in positive and negative conditions.. The P200, an ERP component sensitive to positive stimuli, was modulated by gaze direction only in the positive empathy condition. Positive and negative trials were processed similarly at the early N200 processing stage, but later diverged, with only negative trials modulating the EPN, P300 and LPP components. These results suggest that positive and negative affective empathy are associated with distinct time-courses, and that perceived gaze direction uniquely modulates positive empathy, highlighting the importance of studying empathy with face stimuli.