The Gaze Cueing Effect and Its Enhancement by Facial Expressions Are Impacted by Task Demands: Direct Comparison of Target Localization and Discrimination Tasks 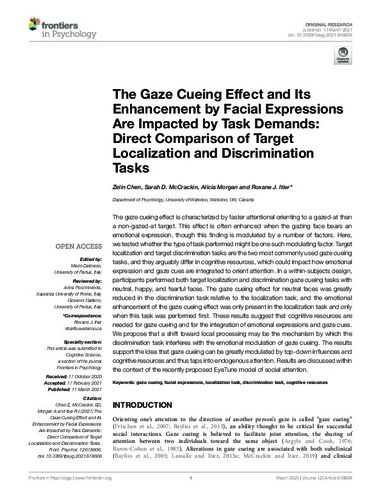 The gaze cueing effect is characterized by faster attentional orienting to a gazed-at than a non-gazed-at target. This effect is often enhanced when the gazing face bears an emotional expression, though this finding is modulated by a number of factors. Here, we tested whether the type of task performed might be one such modulating factor. Target localization and target discrimination tasks are the two most commonly used gaze cueing tasks, and they arguably differ in cognitive resources, which could impact how emotional expression and gaze cues are integrated to orient attention. In a within-subjects design, participants performed both target localization and discrimination gaze cueing tasks with neutral, happy, and fearful faces. The gaze cueing effect for neutral faces was greatly reduced in the discrimination task relative to the localization task, and the emotional enhancement of the gaze cueing effect was only present in the localization task and only when this task was performed first. These results suggest that cognitive resources are needed for gaze cueing and for the integration of emotional expressions and gaze cues. We propose that a shift toward local processing may be the mechanism by which the discrimination task interferes with the emotional modulation of gaze cueing. The results support the idea that gaze cueing can be greatly modulated by top-down influences and cognitive resources and thus taps into endogenous attention. Results are discussed within the context of the recently proposed EyeTune model of social attention.