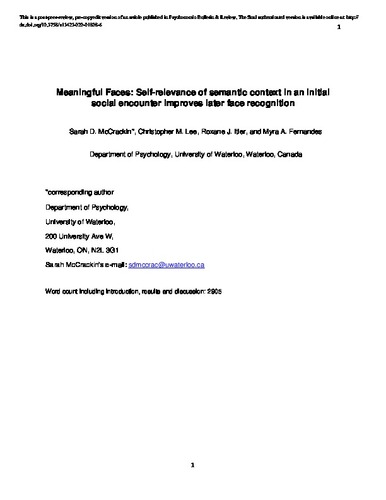 Self-relevant stimuli (i.e. meaningful/important to the observer and related to the self) are typically remembered better than other-relevant stimuli. However, whether a self-relevance memory benefit could be conferred to a novel neutral face, remains to be seen. Recent studies have shown that emotional responses to neutral faces can be altered by using a preceding sentence as context that varies in terms of self-relevance (self/other-relevant) and valence (positive/negative; e.g. "S/he thinks your comment is dumb/smart"). We adapted this paradigm to investigate whether the context conferred by the preceding sentence also impacts memorability of the subsequently presented face. Participants saw faces primed with contextual sentences and rated how aroused, and how positive or negative, the faces made them feel. Later incidental recognition accuracy for the faces was greater when these had been preceded by self-relevant compared to other-relevant sentences. Faces preceded by self-relevant contexts were also rated as more arousing. There was no impact of sentence valence on arousal ratings or on recognition memory for faces. Sentence self-relevance and valence interacted to affect participants’ ratings of how positive or negative the faces made them feel during encoding, but did not interact to impact later recognition. Our results indicate that initial social encounters can have a lasting effect on one’s memory of another person, producing an enhanced memory trace of that individual. We propose that the effect is driven by an arousal-based mechanism, elicited by faces perceived to be self-relevant.