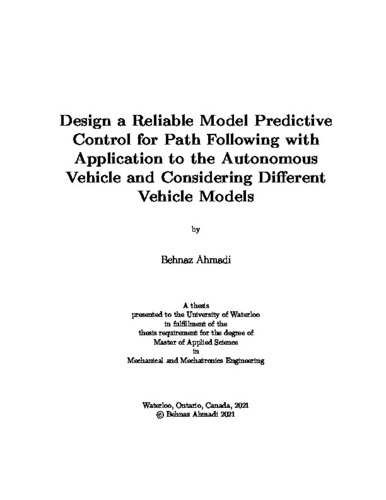 Despite many advances that aim to bring autonomous cars to market, several challenges remain to overcome before such technology is widely adopted. Among these is the need for a reliable cornering control that can work efficiently in real-time. This thesis will focus on the successful development, implementation, and validation of reliable control algorithms for motion control of autonomous vehicles, which will give the University of Waterloo Watanomous team a competitive edge in the annual Auto-Drive competition. A reliable path following controller based on Model Predictive Control(MPC) and using different types of vehicle models are developed to 1) minimize the lateral distance between the vehicle and a reference path, 2) minimize the heading error of the vehicle, and 3) limit the rate of steering inputs to their saturation values and produce smooth motions. The control algorithm proposed in this thesis will rely on a known path as the desired input. Such input will be used to define a horizon over which reliable control actions can be computed to command the vehicle along the desired path with minimum lateral position error. The proposed MPC is implemented in MATLAB in which the associated Optimal Control Problem (OCP) is discretized using the direct Multiple Shooting method. MPC is tested using the CarSim vehicle simulator to validate its performance for double lane change(DLC) vehicle maneuver at constant low/high forward speeds and roads with different known friction coefficients. The effects of changing prediction horizon, sampling time, and weighting factors on path-following controllers’ performance are also discussed. Simulation results show that designed controllers pulled the system back to the predefined reference path, and tracking performances were satisfactory. It is also observed that MPC designed using a linear dynamic model and a combined single-track model, both had comparable performances and less lateral tracking error than MPC designed using the non-linear kinematic model for various speeds on the dry road, and at the speeds below 80kph on the wet road. Moreover, MPCs using linear dynamic and combined single-track vehicle models both worked in the shorter horizon. Overall, MPC using a combined single-track model showed enhanced performance by comparing the other two schemes for all the tests conducted on wet and dry roads at various vehicle speeds.