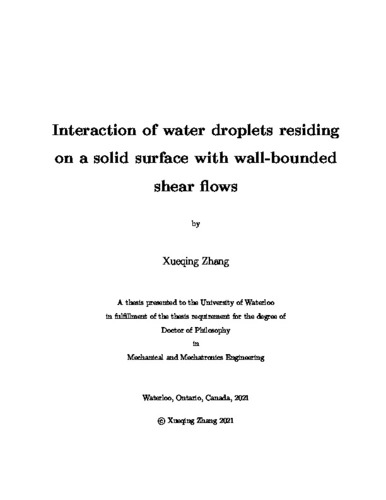 Droplet depinning under wind-forcing arises in a wide range of engineering scenarios. Better understanding of this phenomenon not only can optimize the design of relevant engineering systems, but also can help preventing system failures caused by unwanted droplet accumulation. This thesis focuses on physical phenomena associated with the onset of droplet motion in wall-bounded shear flows formed by a flow over a flat plate and impinging jets. Specifically, (i) the critical droplet depinning conditions, and (ii) the influence of droplets on the surrounding flows are considered. Boundary layer flows and impinging jets were generated by the recirculating wind tunnel and a custom jet facility at the University of Waterloo. The freestream velocity and the jet centreline velocity were programmed to ramp up at three accelerations dU/dt =1.2,2.2, and 4.4 m/s^2. Comprehensive characterization of the background shear flows for droplet depinning tests were carried out using hot-wire anemometry and particle image velocimetry (PIV). The influence of droplets on ambient shear flows were investigated using scaled-up droplet models representative of the morphological shapes of a sessile droplet (sessile) and a deformed droplet on the verge of depinning (runback). At a Reynolds number representative of critical depinning condition, flow development over droplet models exhibits general similarities to that over other surface-mounted smooth obstacles. In laminar boundary layers, the presence of droplet models significantly modifies the near-wall velocity profiles and promotes laminar-to-turbulent boundary transition in a similar fashion as in bypass transition. Aerodynamic drag on droplet models submerged in a laminar boundary layer of thickness comparable to the model height was estimated based on flow field measurements using control volume analysis. The drag coefficients of the sessile and runback models are C_D≈0.36 and 0.35, respectively, approximately 10% lower than the drag coefficient of the hemisphere. Although the difference in drag coefficients is not significant for the two droplet models, the runback model demonstrated a reduction in drag force as compared to the sessile model, which is proportional to its reduction in the frontal area. For a given solid model, drag decreases significantly with elevated turbulence intensity in the incoming flow. Real water droplets of 75,90,105, and 120 μL were tested in the flat plate boundary layer and impinging jets at orientation angles of 30^∘, 45^∘, 60^∘, and 90^∘ on substrate of anodized aluminium. Droplets in flat plate boundary layer have a constant depinning threshold of We_(h,crit)=7.5±0.5. By contrast, droplets in impinging jets exhibit much lower thresholds in the range 2≤We_(h,crit)≤4. The effect of droplet volume and flow acceleration on depinning thresholds is small as compared to that of the flow orientation angle. A strong power-law relation is demonstrated between We_(h,crit) and volumetric shape factor Κ, and an empirical relation is established to predict the critical depinning velocity based on droplet volume, length, and height.