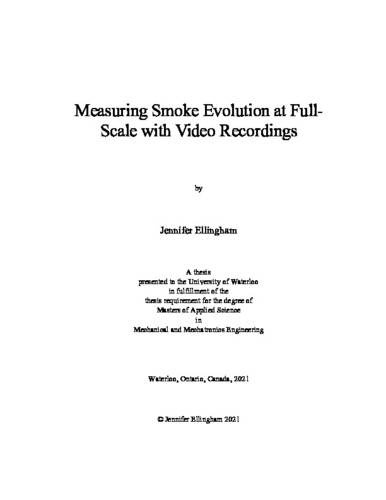 Many knowledge gaps exist in our current understanding of fire and smoke dynamics — caused in large part by a lack of data on smoke evolution in fires. Advances in computer technology, however, now make it possible for high volumes of data to be processed at low cost. Video processing on an image-by-image basis is presently economically feasible and, consequently, visible aspects of fire and smoke evolution can be observed and measured in detail to help gain a better understanding of fire dynamics. Better tools for assessment of the evolution of smoke layer height are of interest to fire analysts because the predominant method of measurement in intermediate- and full-scale fire experiments is a subjective method wherein observers visually estimate the time the smoke layer takes to reach objects of known height in video recordings. Alternative methods for estimating smoke layer height require expensive sensors and utilize varying levels of subjectivity. Thus, development of a low-cost, frame-by-frame, fine mesh video analysis method forms the subject of the present research project. The method will facilitate measurement of the evolution of smoke layer height with time with more precision than previously possible and with limited subjectivity. The method also allows smoke density to be measured at many locations, a significant benefit given that previously smoke density could only be measured in limited locations, if at all, due to the cost of the necessary equipment and the challenges associated with installation of the equipment in intermediate- and full-scale fire experiments. The new method, called the radiance method, is an adaptation of a recently adopted measurement technique in the air pollution field. It compares recorded radiance in light and dark pixel analysis areas in a camera view to the original values on a continuous basis. In this work, the radiance method is derived theoretically before an iterative method development process is used to develop a ten-step radiance approach for analysis of video records from fire experiments. Existing video, thermocouple and heat release rate data from 11 well-instrumented, full-scale house fire experiments, fueled by five (Type A-E) sofa materials, are used in conjunction with results from 29 small-scale tests to characterize smoke evolution in the full-scale experiments. The video data from the 11 full-scale fire experiments are then used to develop and refine the radiance method through four method iterations. In all cases examined, the radiance method smoke layer descent times fall within the observer characterized times. Conversely, the other smoke layer height estimation methods can be off by more than 155 seconds relative to the observer determined values. Relative ranking of the values of maximum smoke density as determined by the radiance method match the characterized smoke density rank where comparison is possible. Two additional full-scale house fire experiments, fueled by Type F sofa materials, include revised instrumentation aimed toward improving radiance method results and determining possible applications of the method. Collectively, the results indicate that the radiance method can estimate smoke layer descent time from video recordings with visible light areas to within 91 seconds of observer-based estimates. It may be possible to minimize these differences further via a sensitivity analysis on the choice of smoke layer threshold value. If a backlit light area and adjacent dark area are visible in the video recording, then maximum smoke density results can be obtained using the radiance method. In all cases, the maximum smoke density values for each fuel type (across experiments) fall within ±1% of the average value. The maximum smoke density values are distinct between fuel types and agree with characterization rankings (where available). Moreover, the method can be applied to existing and future colour and IR (black and white) video recordings. The radiance method can be applied to video recordings on a frame-by-frame basis but, for this application, an averaging scheme is employed to smooth the data for clearer results. Inclusion of checkerboards and cameras, with carefully selected camera models and placement, can significantly increase the amount and precision of the smoke evolution data that can be obtained. A caveat is that the red, green, and blue colour streams of colour images are influenced (to different extents) in different lighting conditions. The availability of camera calibration data, which converts recorded pixel values to radiance values, can impact the smoke layer descent times by up to 11 seconds and maximum smoke density by up to 2%. In this work, the radiance method is used to measure smoke layer descent time and smoke density at up to 69 different vertical locations within a compartment, from a single camera angle, on a second-by-second basis. The maximum smoke density was measured at up to 14 different locations down the window in the compartment from a single camera angle. The novel radiance method developed in this thesis shows incredible promise for smoke analysis in full-scale fire experiments. Results can be useful both in aggregate and for comparison against detailed computational fire models where data on a fine mesh is needed to validate smoke progression and associated impacts in fire and evacuation models. Use of this method to analyze smoke evolution in more fire experiments, with different set-ups, scales, and instrumentation, is recommended and would further validate the radiance method as presented in this thesis.