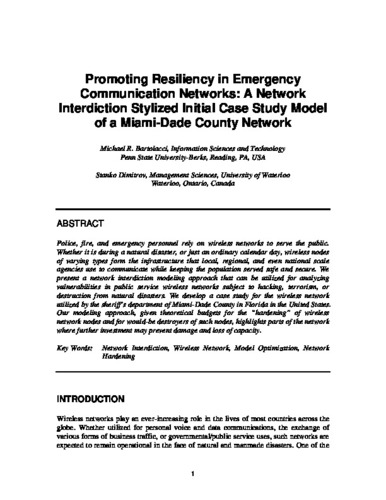 Police, fire, and emergency personnel rely on wireless networks to serve the public. Whether it is during a natural disaster, or just an ordinary calendar day, wireless nodes of varying types form the infrastructure that local, regional, and even national scale agencies use to communicate while keeping the population served safe and secure. We present a network interdiction modeling approach that can be utilized for analyzing vulnerabilities in public service wireless networks subject to hacking, terrorism, or destruction from natural disasters. We develop a case study for the wireless network utilized by the sheriff’s department of Miami-Dade County in Florida in the United States. Our modeling approach, given theoretical budgets for the “hardening” of wireless network nodes and for would-be destroyers of such nodes, highlights parts of the network where further investment may prevent damage and loss of capacity.