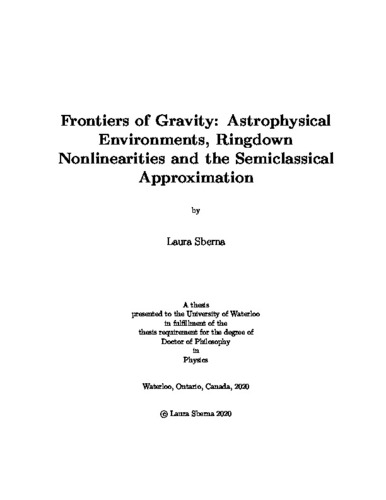 Einstein’s general relativity is based on a tensorial, nonlinear equation for the spacetime metric. The gravitational interaction is however so weak that, in most circumstances, the equations can be solved perturbatively. This is true in early-time cosmology, for the inspiral of binary systems, and even after black holes merge, releasing the equivalent of multiple solar masses in gravitational waves. In this thesis, we analyze a range of problems that can be addressed assuming a background gravitational field and small fluctuations over it. We will progress from problems where the perturbative hypothesis can be tested and holds, to ones that begin to show nonlinear effects, ending with an application of perturbation theory to quantum gravity, where it is only a working hypothesis. We first analyze the dynamics of black hole binaries immersed in a dense gas environment or interacting with a stellar companion. For binaries in a dense environment, we study the effect of accretion and dynamical friction on the gravitational wave emission. We derive the modification of the gravitational wave phase in the assumption of small accretion rates, and assess whether future gravitational wave observatories could detect this effect. For black holes in a binary with a white dwarf, we identify new evolutionary relations and propose a method to infer the black hole and white dwarf masses and their luminosity distance from the gravitational wave signal alone. Next, we study how isolated black holes react to perturbations, in the simplified setting of spherical symmetry and negative cosmological constant. We show that modes belonging to the linear spectrum can be excited nonlinearly. We further find that nonlinear effects can change the black hole mass at percent level, and that this effect can be explained by the flux of characteristic excitations through the black hole horizon. Finally, we propose a new definition of the semiclassical Einstein equations for cosmological spacetimes. We propose that the source on the right hand side of the Einstein equations could be the amount of stress-energy above the instantaneous ground state. In this more speculative application, the linear order semiclassical approximation is not guaranteed to hold. If our hypothesis were confirmed, however, the vacuum stress-energy above the instantaneous ground state would not renormalize the cosmological constant, hinting at a resolution of the longstanding problem connected to its observed value.