Are you as important as me? Self-other discrimination within trait-adjective processing 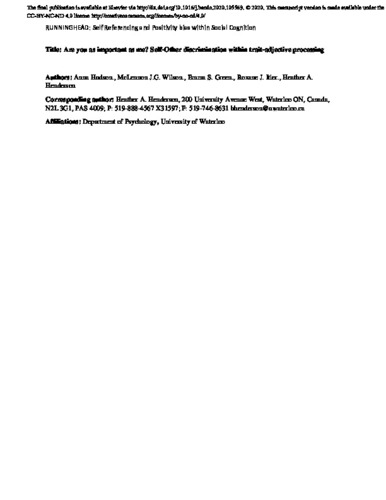 Healthy adults typically display enhanced processing for self- (relative to other-) relevant and positive (relative to negative) information. However, it is unclear whether these two biases interact to form a self-positivity bias, whereby self-positive information receives prioritized processing. It is also unclear how a blocked versus mixed referent design impacts reference and valence processing. We addressed these questions using behavioral and electrophysiological indices across two studies using a Self-Referential Encoding Task, followed by surprise recall and recognition tasks. Early (P1) and late (LPP) event-related potentials were time-locked to a series of trait adjectives, encoded relative to oneself or a fictional character, with referent presented in a blocked (Exp. 1) or mixed (Exp. 2) trial design. Regardless of study design, participants recalled and recognized more self- than other-relevant adjectives, and recognized more positive than negative adjectives. Additionally, participants demonstrated larger LPP amplitudes for self-relevant and positive adjectives. The LPP self-relevance effect emerged earlier and persisted longer in the blocked (400–800 ms) versus mixed design (600–800 ms). The LPP valence effect was not apparent in the blocked design, but appeared late in the mixed design (600–1200 ms). Critically, the interaction between self-relevance and valence appeared only behaviorally in the mixed design, suggesting that overall self-relevance and valence independently impact neural socio-cognitive processing.