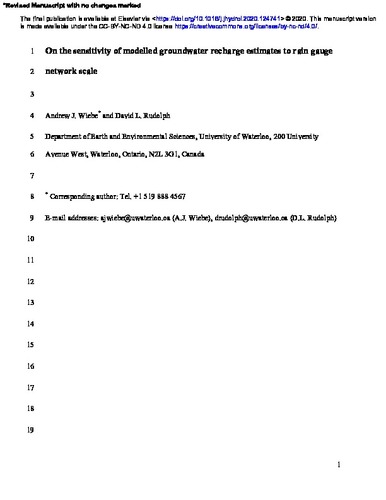 Rainfall is often the largest component of the water budget and even a small uncertainty percentage may lead to challenges for accurately estimating groundwater recharge as a calculated residual within a water budget approach. Watersheds are a common scale for water budget assessment, and rainfall monitoring networks typically have widely spaced gauges that are frequently outside the watershed of interest. The effects of rainfall spatial variability and uncertainty on groundwater recharge estimates have received little attention and may influence water budget-derived recharge estimations. In the present study, the influence of spatial density in rainfall measurement on the numerical estimation of groundwater recharge was investigated through a series of modelling scenarios utilizing field data obtained from progressively denser rain gauge networks associated with a typical watershed in southern Ontario. The uncertainty of the recharge component of the water budget was used as a metric to aid interpretation of results. The scenarios employed networks composed of: 1) one nearby national weather station (within 3 km), 2) a regional network of six stations (within 30 km), and 3) a local network of six stations, five of which were within the selected watershed. A coupled and fully distributed hydrologic model (MIKE SHE) was used in the scenario analysis and applied to the Alder Creek watershed on the Waterloo Moraine near Kitchener-Waterloo, Ontario. Rainfall showed poor spatial correlation, even at the daily time scale. Average annual results over a three-year period showed that recharge rates varied up to 140 mm per year (~40 % of previously estimated annual recharge) among scenarios, with differences between scenarios greater than the water budget uncertainty during one of the years. These findings suggest that the availability of local rainfall measurements has the potential to influence the calibration of transient watershed hydrogeological models.