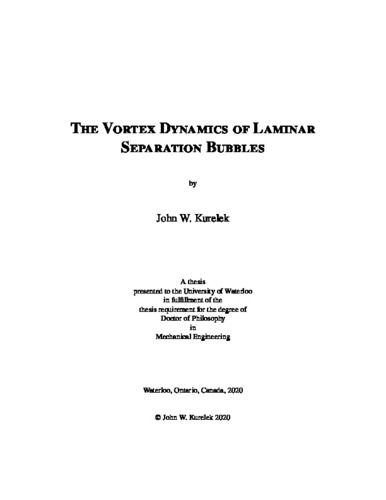 Laminar separation bubbles (LSBs) are common features in low Reynolds number flows, and can have considerable performance impacts in applications such as hydrofoils, small-to-medium scale wind turbines, micro and unmanned aerial vehicles, glider planes, and aircrafts operating at low speed or high altitude. In particular, the very presence of an LSB can cause loss in lift, increase in drag, and/or unwanted noise emissions, while also leaving the flow in an unstable configuration, as only slight changes in the environment or operating conditions can lead to further detrimental effects, such as the sudden onset of stall. All of these performance impacts are rooted in the laminar--turbulent transition process of an LSB, where disturbance growth in the unstable shear layer leads to its roll-up and the formation of coherent shear layer vortices that govern the reattachment process and are the source of unsteady loads and noise emissions. Therefore, a comprehensive understanding of LSB transition and vortex dynamics is a prerequisite to the development of effective control strategies. The work completed as part of this thesis is at the forefront of this effort, as flow development in laminar separation bubbles is studied and a new forcing technique is developed and tested. The supporting data is experimental and is collected primarily by means of particle image velocimetry. First, flow development in a nominally two-dimensional LSB formed over an airfoil is studied. Forcing at the LSB fundamental frequency and the first subharmonic of this frequency are found to inhibit and promote the prevalence of vortex merging in the LSB, respectively. When left to develop naturally, the flow development is characterized by the periodic roll-up of the separated shear layer upstream of the mean maximum height location. The vortices are strongly two-dimensional at formation, but quickly develop spanwise deformations with downstream convection, leading to their breakdown to smaller scales near the mean reattachment point. The deformations take the form of spanwise undulations in the vortex filaments, which tend to develop at wavelengths ranging between one and seven times the streamwise wavelength of the structures. These undulations continually intensify, ultimately leading to the breakdown of the vortices, while re-orienting vorticity from the spanwise direction into the streamwise and wall-normal directions, creating hairpin-like structures. An instability mechanism is hypothesized to be responsible for the development of these spanwise undulations, and a new forcing technique is developed to target it. The technique is capable of producing deterministic, three-dimensional disturbances modulated to a desired spanwise wavelength, while holding all other parameters (amplitude, frequency, and streamwise wavelength) constant. This is achieved using two alternating current, dielectric barrier discharge (AC-DBD) plasma actuators arranged in streamwise succession, which are operated simultaneously. The upstream actuator produces a spanwise uniform disturbance, which is then spanwise modulated by the output of the downstream actuator, with a relative phase delay introduced in order to spatially superimpose the two outputs. The technique is verified to produce the desired disturbance characteristics through a detailed experimental characterization that considers both quiescent and in-flow conditions. The effects of this forcing technique and the subsequent growth in spanwise modes is studied in an LSB formed over a flat plate subject to an adverse pressure gradient. Disturbance growth is tracked throughout the LSB, identifying small amplitude disturbances of a frequency matching the primary Kelvin-Helmholtz instability that undergo convective amplification downstream of the mean separation point. In comparing results from forcing the flow with two and three-dimensional disturbances, with the latter modulated to a spanwise-to-streamwise wavelength ratio of 2:1, disturbance amplitudes in this region are higher for the three-dimensional case, indicating a preferential amplification of spanwise modes in the upstream boundary layer. While this growth may result from the underlying stability of the upstream boundary layer, it could also stem from a low frequency modulation of the base flow, as significant spanwise non-uniformities of the same wavelength are found in the unforced natural flow. Nevertheless, stability predictions in the LSB find that, regardless of the forcing scenario, the normal (two-dimensional) modes are subject to the highest amplification rates throughout the length of the LSB, while disturbance modes of an oblique wave angle of less than 30 deg. experience comparable, yet reduced, growth rates. Thus, disturbance growth in the LSB is confirmed to be spanwise wavelength dependent. The effectiveness of the spanwise modulated forcing, in terms of effecting change in disturbance and flow development, is justified, as its wavelength ratio (2:1) corresponds to a wave angle of 26.5 deg., while the other three-dimensional forcing configurations considered are less effective on account of their larger wave angles (33.7 and 45 deg.). The effect of unstable spanwise modal growth on the development of the LSB shear layer vortices and the ensuing vortex dynamics is assessed. The small amplitude perturbations tracked through the fore portion of the LSB manifest in the shear layer vortices, imparting a spanwise wavelength, if present, in the vortex filaments. Thus, in the case of two-dimensional forcing, the shear layer vortices remain largely two-dimensional until their breakdown, while for the three-dimensional forcing case, significant spanwise undulations develop at the 2:1 ratio prescribed by the forcing. The filaments surge forward in the streamwise direction downstream of the three-dimensional actuator's active regions, while lagging behind at spanwise locations downstream of the actuator gaps. A continual intensification of vortex stretching ensues, leading to rapid filament deformations. Through supporting observations from a simplified vortex filament model, the undulatory shape of the vortex filament is shown to self-induce a net rotational motion, causing the streamwise forward and rearward sections of the filament to tilt away and toward the wall, respectively. This, coupled with the wall-normal velocity gradient, causes the continual stretching of the filament. These vortex motions are observed consistently for all LSBs studied throughout this thesis, and apply more broadly to all LSBs, since regardless of how a spanwise undulations is initially produced, if present, a vortex filament will tend to develop in the way shown in any near-wall shear flow. Thus, these dynamics are found to be intrinsic to the breakup process of shear layer vortices in laminar separation bubbles.