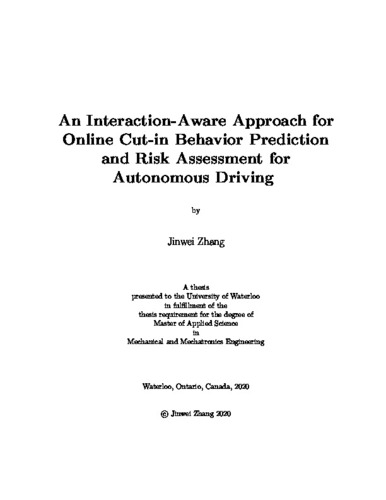 The development of autonomous driving has become one of the biggest trends of the 21st century's technology. However, the promotion and the mass production of autonomous vehicles are still at the beginning stage. The human-driven vehicles will still predominate the traffic. Therefore, understanding the interaction and decision logic between human-driven vehicles, and utilizing it to predict their driving behavior are the keys to the development of autonomous driving techniques. Cut-in behavior is one of the top priorities due to its high risks. Rear-end collisions happen a lot when the lag vehicles cannot predict this abnormal lane change behavior of the front vehicles and response in time. However, related studies on cut-in event prediction and risk assessment have rarely been presented in autonomous driving field. A phase-based design framework is proposed in this work to realize online prediction and risk estimation of the cut-in behavior considering interactions between the involved vehicles. After preprocessing and analyzing of a naturalistic driving dataset, a cut-in behavior predictor and a risk estimator are devised based on Gaussian mixture model and Gaussian mixture regression method. Compared with baseline approaches, both the predictor and estimator designed following the proposed framework achieve enhanced results, which can further improve the driving safety of autonomous vehicles when cut-in behavior occurs.