Regression with incomplete multivariate surrogate responses for a latent covariate 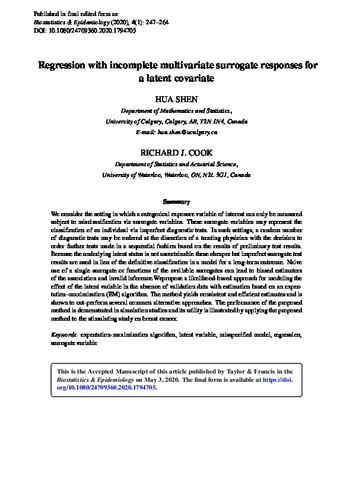 We consider the setting in which a categorical exposure variable of interest can only be measured subject to misclassification via surrogate variables. These surrogate variables may represent the classification of an individual via imperfect diagnostic tests. In such settings, a random number of diagnostic tests may be ordered at the discretion of a treating physician with the decision to order further tests made in a sequential fashion based on the results of preliminary test results. Because the underlying latent status is not ascertainable these cheaper but imperfect surrogate test results are used in lieu of the definitive classification in a model for a long-term outcome. Naive use of a single surrogate or functions of the available surrogates can lead to biased estimators of the association and invalid inference. We propose a likelihood-based approach for modeling the effect of the latent variable in the absence of validation data with estimation based on an expectation–maximization (EM) algorithm. The method yields consistent and efficient estimates and is shown to out-perform several common alternative approaches. The performance of the proposed method is demonstrated in simulation studies and its utility is illustrated by applying the proposed method to the stimulating study on breast cancer.