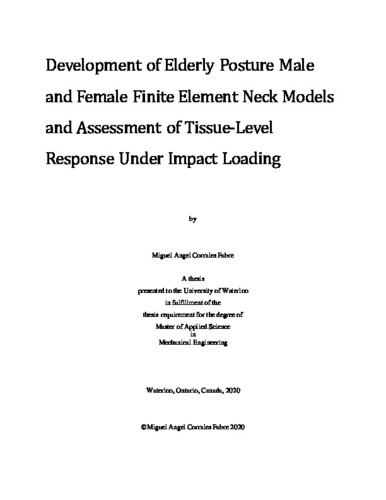 The growing elderly population and their increased incidence of injury calls for strategies to protect this at-risk population. The effects of ageing include a change in posture, biological material properties, and bone morphology relative to a younger population. These changes may contribute to the increased rates and severities of injuries observed in the elderly population in car crash scenarios but requires further investigation. Finite element human body models (HBMs) have been used as a design tool in automotive, sports, and defence applications to understand the biomechanical response of humans and to test and develop protective technologies. HBMs enable the investigation of changes that may occur with ageing and to assess the resulting response at the tissue level to aid in an improved understanding of injury risk. Specific to the neck, the lordosis of the cervical spine increases with age. It has been proposed that the overall neck posture influences the response of the soft tissue under impact loading. Given that the neck region serves as the connection between the head and the thorax, the kinematic response might change with a change in the neck posture, and therefore, the likelihood of injury may change with increased cervical lordosis associated with age. Importantly, the effect of age has not been extensively studied using HBMs in the neck region. In this study, male and female aged neck models were developed from existing young neck models. The aged neck models included the average increase in lordosis of the cervical spine and an increase in the facet joint angles associated with ageing. Available literature was used to define a posture for each model to represent an average 75-year-old 5th percentile female and 50th percentile male, and a new methodology to reposture the models was developed. In addition, the cervical capsular joint cartilage geometry was improved based on the literature. The young head and neck models were accurately repostured to represent average 75 YO subjects. Importantly, with the reposturing methodology developed in this study, the aged neck models demonstrated comparable mesh quality to the young models. The young and aged neck models were simulated in frontal (2g to 15g), lateral (4g to 7g), and rear (7g) impact scenarios and assessed using head kinematics, the capsular ligament (CL) distraction expressed as a nominal strain, and the changes in the intervertebral disc (IVD) space expressed as a nominal strain. The kinematic responses were compared between young and aged models and between male and female models. In this study, it was found that the model head kinematics were not sensitive to the morphological changes in the neck. However, a sensitivity to the age-related lordosis changes was identified at the tissue level within the models. Importantly, in the rear impact, the female models predicted higher CL strains than those of the male model, and the predicted strains in the aged female neck model were higher than those in the young female model, in agreement with findings in the literature. In contrast, the aged female model generally predicted less IVD space strain and less CL strain relative to the young female model in the frontal and lateral impacts. In general, the aged male neck model predicted higher IVD space strain, and higher or similar CL strain compared to the young model. The variation in predicted results with age were attributed, in part, to the subject-specific nature of the models. In particular, the subject-specific male neck was longer than that of the average population. In the present study, it was shown that global metrics, such as head kinematics, may not be sensitive to changes in posture, whereas specific soft tissue responses could be more informative in terms of detecting changes in response and may be more relevant to the prediction of injury risk. It is recommended that future research incorporate the effects of ageing on the material properties within the neck models. The developed aged models provide a basis for assessing the effect of aged posture on response and may inform safety system design and optimization for the elderly population in the future.