From Mt. Moriah to Mom’s Basement: Playing The Binding of Isaac Video Game through the Reception History of the Aqedah 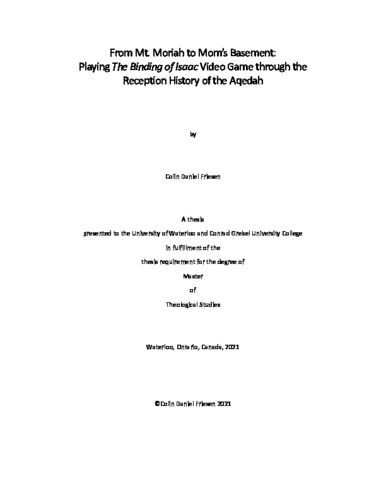 In 2011, Edmund McMillen released The Binding of Isaac (TBOI) video game that retells the story of Abraham’s attempt to sacrifice Isaac on Mt. Moriah. However, the game departs significantly from the biblical account in various ways, such as placing the retelling in a modern setting and switching the parental figure from father to mother. Contemporary scholars have sought to understand The Binding of Isaac primarily through the context and intentions of the game’s creator. In contrast, my thesis analyzes TBOI through the lens of the Aqedah’s reception history. Finally, this thesis shows that TBOI represents another example of the Aqedah’s reception albeit within an unorthodox medium, that both reflects and draws on elements of the broader history of interpretation and demonstrates itself capable of holding multiple viewpoints at the same time. Thus, I show how TBOI functions as a midrash generator whose narratological and ludological elements encourage and accelerate reinterpretations of the game as it is played. To do so, the first half of the project surveys a sampling of the Aqedah’s reception history (chapter 2) and describes TBOI’s ludological elements within the broader field of game studies (chapter 3). I begin the second half of my thesis where I analyze TBOI in light of the Aqedah’s reception history and show how it both resonates with and critiques other interpreters (chapter 4). Finally, I analyze TBOI’s function as a midrash generator that prompts ongoing reinterpretations (chapter 5). This project adopts an interdisciplinary approach using TBOI as a case study for integrating reception history and game studies. This project provides a precedent for exploring both how a reception history approach could be applied to other retellings of religious stories in the video game medium, and a starting point for further development of midrash generation as a concept.

Colin Friesen (2021). From Mt. Moriah to Mom’s Basement: Playing The Binding of Isaac Video Game through the Reception History of the Aqedah. UWSpace. http://hdl.handle.net/10012/16628