The Green Energy Act: Definition, Consultation, and a Case Study 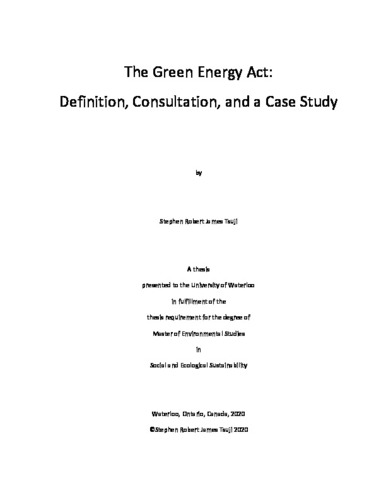 The Green Energy Act (2009) has had weathered various forms of criticism during its decade-long existence from 2009 to 2019. One of the vital points of concern is housed within the Act in the form of the ambiguity of the term Green Energy. Despite concerns being raised in legislation regarding this fact, it was left ambiguous while rallying under the umbrella of the term that boasts positivity and progressive approaches. Consequently, this false championing allowed it to go undetected due to its benign connotations. This allowed the Bill to be expedited through the already problematic consultation process that had many challenges associated with it such as its timeframe, location and accessibility. The entirety of the Bill and its consultation process raises question of whether the government adequately performed their fiduciary duty and their duty to consult with Indigenous people of Ontario, Canada. The case study of the Kabinakagami River Waterpower Project serves as a case study of the aftermath of the Green Energy Act (2009) and the Indigenous attitudes towards projects initiated under the Act. If nothing else the accounts and testimonies found within shall stand as a testament to the hubris of calling an energy project green without properly assessing and considering the impacts. This research stands as a cautionary tale against the dangers of green-labeling.