All the World's a Stage: Fictionalism, Metaphysics, and Truth 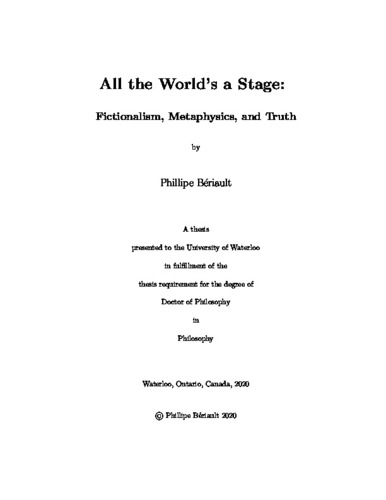 Fictionalism has been an appealing position for many philosophers seeking to avoid controversial ontological commitments implicit in certain kinds of discourses, while also trying to account for the usefulness of those discourses. While fictionalists with respect to various domains have made impressive attempts to explain how something can be both fictional and useful, extant fitionalist views retain one problematic commitment: that there are no substantively true assertions made within such domains. My dissertation attempts to develop and defend a semantic anti-realist account of fictionalism which does not share this commitment to error theory. Diagnosing the source of the residual commitment to error theory as arising from a commitment to a particular picture of meaning, I propose that fictionalism can provide an alternative semantics that grants that such assertions can be successfully truth-stating. I begin by describing a general framework for understanding debates between realists and anti-realists in various domains - derived primarily from the work of Michael Dummett and Crispin Wright - according to which realism for a domain roughly boils down to the view that (a) our assertions in that domain, if true, represent a mind-independent reality; and (b) that we can make true assertions in that domain. The fictionalist's aversion to the ontological commitments of realism for particular domains requires a rejection of either (a) or (b). My suggestion is that fictionalists are mistaken in giving up (b), and that the work they have done to bolster their views instead provide us with the tools we need to reject (a). I consider two particular examples to illustrate my case. First, I look at Mary Leng's and Stephen Yablo's respective developments of mathematical fictionalism, both of which make important use of Kendall Walton's theory of make-believe. Contrary to Leng's and Yablo's own views, I present a case for the view that by recognizing mathematics as a sort of make-believe, fictionalism can instead be used to fashion an alternative semantics for mathematical claims, and so provide grounds for rejecting the mathematical realists' commitment to (a). Using lessons derived from the mathematical case, I develop an account of modal fictionalism that similarly outlines modal discourse as a kind of make-believe which provides an alternative, anti-realist semantics for possible worlds discourse. I conclude by moving away from particular instances of fictionalism to consider some potentially controversial consequences of my approach to fictionalism, defending the commitments to alethic and logical pluralism implicit in my view.