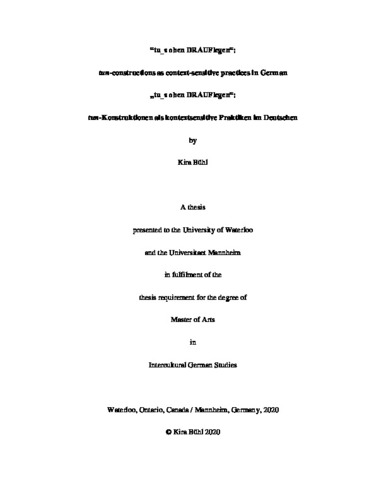 There are a variety of syntactic formats available to get others to do something in German interaction. To make a request or give an instruction, speakers of German may use an imperative, a declarative, a single word, or gestures. When making requests or giving instructions as part of a collaborative activity such as renovating a room or cooking dinner, speakers of German use a number of different verbs, including the polysemous verb tun. Speakers use both the periphrastic format of tun as an auxiliary verb followed by an infinitive (tus da hinlegen) as well as tun as a main verb with a directional adverbial or prepositional phrase (tu des weg; tu des in den Kühlschrank) to instruct interactants to complete a certain task or to direct them to perform a certain action. The first represents a highly stigmatized use of tun (Dudenredaktion, 2014), the latter often considered too vague (Kreß, 2017). This multimodal, conversation analytic study investigates these two tun constructions as context-sensitive practices. I analyze the occurrence and function of 37 examples (13 examples tun + infinitive periphrase; 24 examples tun + directive adverbial complement) in naturally occurring request and instruction sequences. Data are observed in audio and video recordings of everyday German interactions taken from the FOLK corpus that is part of the Datenbank für Gesprochenes Deutsch (DGD). Even though tun in the above-mentioned examples is widely believed to be “bad German” (Brinckmann & Bubenhofer, 2012), the study demonstrates that tun appears in specific contexts for particular types of requesting actions. In most cases, interactants are already oriented to a joint activity. The tun-constructions thus extend something already in progress and mobilize a recipient’s immediate bodily action. As tun has not been studied in greater depth from a conversation analytic approach, this study contributes to the practices of spoken interaction in German.