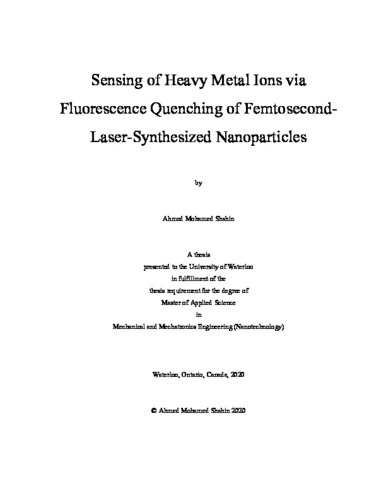 Nanoparticles (NPs) for sensing of heavy metal ions (HMIs) via fluorescence quenching are becoming sought-after for their facile synthesis, cost effectiveness, and high degree of tunability. In this thesis, the sensitive and selective fluorescence-quenching detection of the four most toxic HMIs (Hg, Pb, Cd, and As), as listed by the World Health Organization (WHO), is demonstrated using femtosecond (fs)- laser-treated nanoparticles. A fs laser is used to exfoliate 2D flakes of nitrogen-doped graphene oxide (NGO) and molybdenum disulfide (MoS2) dissolved in acetonitrile and a 1:1 ethanol-water mixture and convert them into NPs. The chemically active NPs bond with atoms from the laser-dissociated acetonitrile (CH3CN), ethanol (C2H5OH), and water (H2O) molecules to form solvent-functionalized NPs, which are characterized by absorption spectroscopy, photoluminescence (PL) spectroscopy, Raman spectroscopy, X-ray photoelectron spectroscopy (XPS), and transmission electron microscopy (TEM). The high degree of functionalization of the 2D NPs with nitrogen, oxygen, hydrogen, and carbon groups allowed highly sensitive detection of HMIs owing to binding and charge transfer between the HMIs and functional groups, which reduces the excess carriers associated with the functional groups and leads to quenching of the nanoparticles’ PL. Selective sensing of the HMIs using the NP solutions is attributed to the different bond polarities associated with the different combinations of NPs and functional groups, which electrostatically attract HMIs with different affinities. The functional groups responsible for sensing HMIs selectively are studied by Fourier transform infrared spectroscopy (FTIR) and PL lifetime decay of the NPs before and after the addition of HMIs. The method demonstrated here is faster than most previous techniques for functionalizing 2D NPs. The tunable functionalization enables sensitive and selective detection of the four most toxic HMIs with limits of detection (LOD) three times lower than the safe concentration limits of the HMIs in water.