Nesting Ecology of Ducks in the Boreal Forest 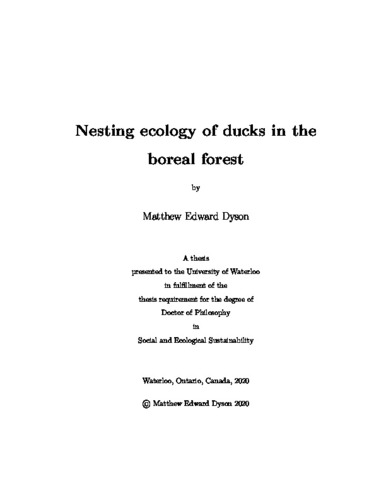 The western boreal forest (WBF) is an important breeding area for North American ducks, second only to the prairie pothole region (PPR). The WBF is experiencing intensive industrial development, causing habitat loss and fragmentation. Land use change can have profound effects on predator-prey interactions and influence population dynamics. In most avian species, nest success is critical to population persistence. Therefore, species are under intense selective pressure to choose a safe nest site. Currently, we have limited knowledge of duck nesting ecology in the WBF, including the influence of changing land use practices on how ducks select nest sites, how those decisions influence nest survival, what predators eat duck nests, and how land use change effects predator communities. To answer these questions, we conducted extensive field research, which involved searching for and monitoring nests of ground nesting boreal ducks, using camera traps to identify predators at real and artificial nests, and using camera traps to monitor predator occupancy across our study area. We located 167 duck nests of 8 different species between 2016 and 2018 by nest searching across a gradient of industrial development. We investigated nest-site selection of ground nesting ducks in the WBF of Alberta at multiple levels and spatial scales using logistic regression-based resource selection functions. We also investigated how land use, landcover, and nest attributes (e.g., nest age, nest initiation date) influenced the daily survival rate of nests using the logistic exposure model. Finally, we evaluated land use and landcover characteristics that predicted predator occupancy using multiscale occupancy models from camera trap data across our study area to understand how predator communities are affected by industrial development. Our results provide the first descriptive studies of the nesting ecology of boreal ducks from Canada. We identified that ducks selected greater overhead cover and proportion of grass at nest sites, relative to paired-random locations. We also identified that nest-site selection strategies at the microhabitat level were different across nesting guilds and species in relation to vegetation structure and composition, which may facilitate coexistence. At a macrohabitat level, we identified strong selection for marsh habitat, with avoidance of pipelines and seismic lines. We also demonstrated how considering multiple spatial scales while investigating habitat selection is critical by illustrating scale dependent responses to different resources. We then spatially predicted our best model and its error to identify important nesting habitat for boreal ducks, which can be used to help prioritize habitat conservation in the region. Nest survival was relatively low across species (0.212 [85% CI: 0.152 - 0.282]) and increased with nest age and varied annually. At the microhabitat scale, nest survival increased with greater graminoid, forb, and shrub cover at the nest. At the macrohabitat scale, nest survival decreased with greater proportion of fen habitat, and increased with greater lengths of pipelines and roads in proximity to the nest. We did not find evidence that oil and gas development negatively affected duck nest survival. We identified 8 different species that predated boreal duck nests including American black bear, weasel spp., American marten, Canada lynx, coyote, red squirrel, common raven, and red-tailed hawk. Next, we found that predator species were more likely to use habitats associated with industrial development as opposed to prey species that avoided industrial development. Specifically, coyotes, black bears, and gray wolves had a higher probability of being detected in association with industrial development suggesting they might be more active or abundant in these areas. Considering this evidence with our nesting ecology data, we suggest that ducks appear to be resilient to current levels of development through avoiding predators during nest-site selection. However, continued development combined with climate change has the potential to continue to alter these relationships. This dissertation represents a first step towards understanding the nesting ecology of ducks in the boreal forest. We provide multiple lines of evidence from our study to help improve our understanding of the effect of industrial development on ducks. The human demand for natural resources is likely to continue to increase the industrial footprint in the boreal forest, a region once considered pristine. To successfully conserve wildlife in this region, continued research is required to deepen our understanding of how the industrial footprint influences habitat selection and space use of predators and prey. The evidence provided herein can be used to revise and adapt our current hypotheses and assumptions to direct further research questions to produce strong inference about ducks and development in the boreal forest.