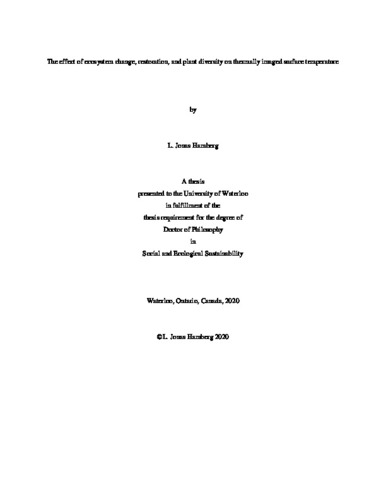 The objective of this dissertation was to test and quantify the hypothesis from ecosystem thermodynamics: that the surface temperature of a terrestrial ecosystem changes with the state of the ecosystem in general, and with plant species diversity in particular. Daytime surface temperature of vegetated terrestrial ecosystems has been hypothesized to decrease with increased biomass and diversity as they in turn increase transpiration, respiration, physical thermal inertia, and productivity, thereby reducing the portion of energy re-emitted as thermal radiation. The hypothesis is tested, and the results and applications are discussed, within the context of ecosystem restoration. I investigated the relationship between ecosystem surface temperature and time since restoration, type of restoration methods, and changes in ecological attributes, including plant species diversity, in two projects restoring temperate wooded ecosystems. The first restoration studied, described in Chapter 2, was a 500+ ha project restoring farmland to oak woodland, spread over 31 fields. Thermal images from 4 space-based instruments along with 12 years of in-situ sampled ecological data of the project were analyzed and compared. Significant decreases in daytime summer surface temperature (4.5 °C in 12 years), and summer diurnal temperature variation (5 °C in 8 years) over time since restorations were found. The study also found a significant relationship between increased plant species diversity and decreased surface temperature when controlling for plant cover and other vegetation attributes. Native plant species had a more pronounced relationship with surface temperature than exotic ones. The results from this study supported the hypothesis, quantified its effect, and showed how thermal imaging from space-based instruments may be used to assess the progress of restoration and the increase in species diversity. The second project studied, in Chapters 3 and 4, was of application of multiple overlapping restoration treatments to experimental plots at two former farmland sites already planted with trees, and one abandoned gravel pit. The main experimental restoration treatment was the transfer of topsoil from a donor forest. On top of the topsoil, further additions were made of woody debris, shrub plantings, and shade shelters. In-situ sampled ecological differences between experimental restoration treatments and controls were assessed in Chapter 3 and thermal differences in Chapter 4. Results from Chapter 3 indicated that most native forest plant species survived within the topsoil as it was transferred from the forest, and re-sprouted in the experimental plots on the second season after the transfer. The plant species community of topsoil recipient plots was significantly different from both recipient and donor site control plots as it contained both the transferred plant species and the species already present at the recipient sites. There was no significant effect on the plant community found from the woody debris, shrub plantings, or shade shelter treatments. Since significant ecological differences were found in Chapter 3, it would be possible to find thermal differences in the same plots in Chapter 4 if the hypothesized relationship was true. To overcome the spatial and temporal resolution limitations of space-based instruments, an Unmanned Aerial Vehicle (UAV)-borne thermal camera was utilized to image the sites four times per day over 9 days. It was found that topsoil recipient plots in the gravel pit site, as well as the smaller and flatter of the two reforestation sites, had significantly lower temperatures than controls (7.0 °C and 2.0 °C respectively) and that the difference in temperature peaked at 2 pm. In the larger and more heterogeneous reforestation site, the normalized surface temperature was only significantly lower than controls (0.7 °C) at 8 pm. There was a significant negative correlation between native forest plant species and surface temperature at all three sites. The combined evidence from the two projects studied was that temperate wooded ecosystems undergoing restoration decreased in their daytime surface temperature and diurnal temperature variation over time, and compared to controls. This decrease is partly due to increasing species diversity. These results support the existence and the direction of the hypothesized, and before this mostly untested, relationship between ecosystem change (including species diversity) and temperature. It also provides examples of the relative significance and quantity of the same relationship using more ecological, and thermal imaging, data over a longer time-span than in previous studies. Both Chapters 2 and 4 found evidence for native and later succession forest plant species having a stronger effect on surface temperature than non-native and ruderal plant species. The dissertation makes a case for thermal imaging to be used both to evaluate and monitor the progress of restoration, and to quantify the ecosystem service of thermal buffering provided by restoration. It also demonstrates the relative strengths and limitations of space-based and UAV-borne thermal imaging instruments.