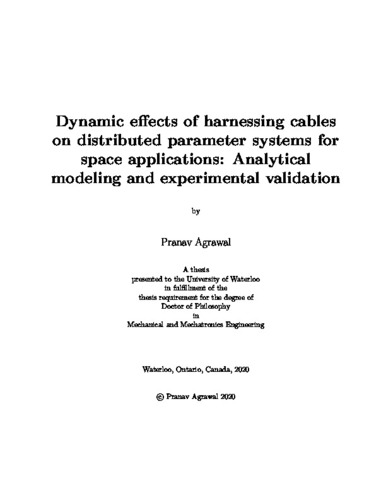 Power and data signal cables constitute a major component of lightweight spacecraft and satellite structures. These cables can account for up to as high as 30% of the structural mass and hence significantly impact the structural dynamics. Until the last decade, these cables were primarily modeled using ad hoc techniques that considered cables as non-structural mass elements and neglected their stiffness and damping effects. However, in the last decade, accurate modeling of cable-harnessed structures has come into the spotlight by incorporating cable dynamics that are governed by cable's stiffness and damping in addition to its mass. Accuracy of these lightweight space structure models are important because the control systems heavily rely on them for their robust performance. Hence, the primary goal of this research is to create simple analytical models that can predict the accurate dynamic behavior of cable-harnessed structures. The beauty of analytical models lie in the fact that they result in low-order high-fidelity governing partial differential equations (PDE) and hence are advantageous over the numerical methods, such as finite element method. A reliable low-order PDE of a dynamical system ensures the robustness of the control algorithms. Additionally, analytical models provide deeper insights into the system due to the possibility of obtaining closed-form solutions and ease of conducting parametric analysis. The current research can be classified into solving the following two broad problems: 1. modeling the damping mechanisms in cable-harnessed beam structures, 2. modeling the accurate stiffness and inertia effects in cable-harnessed two-dimensional structures. The first problem addresses accurate modeling of material damping in the cable-harnessed beam system which was identified as a major gap in the present literature. The system consists of the cables wrapped around the beam in specific periodic geometry. In the presented research, the energy loss mechanisms in the system was incorporated by using the Kelvin-Voigt and hysteresis damping models. Applying an energy-equivalent homogenization method, the proposed technique modeled the cable-harnessed beam as an equivalent continuum (beam-like) structure. In order to validate the model, cable damping was first characterized using dynamic testing methods and relevant loss factors were obtained for both the models. In the next step, experimental modal testing was performed on the fabricated cable-harnessed beams to obtain the modal characteristics of the system such as natural frequencies and frequency response functions. These experimentally obtained characteristics were compared with those using the proposed model and were found to be in a good agreement. The second problem constitutes the major contribution of this thesis. It is worth mentioning that in the past, no analytical models have been developed that consider two-dimensional plate-like host structures to model the cable-harnessed system. Researchers have generally considered one-dimensional beam-like host structures for modeling purpose as it simplifies the mathematical formulation. In this research, analytical modeling based on a homogenization approach is proposed to develop an equivalent continuum model of cable-harnessed plates. This modeling problem is further broken down into the following sub-problems depending on the way the cables are harnessed to the host plates: 1. cables harnessed parallel to a plate's edge, and 2. cables wrapped across the plate in a defined pattern. For both these cases, separate mathematical derivations were carried out to obtain governing PDEs that represent the dynamic behavior of these structures. The proposed models are experimentally validated using modal testing of the fabricated cable-harnessed plates. Comparisons of natural frequencies, mode shapes and frequency response functions provided confidence in the correctness of the proposed model. In addition to providing accuracy for low order control algorithms, the proposed models can be further used to obtain optimal cable placement strategies such that the dynamic effects of the cable harness are minimized.