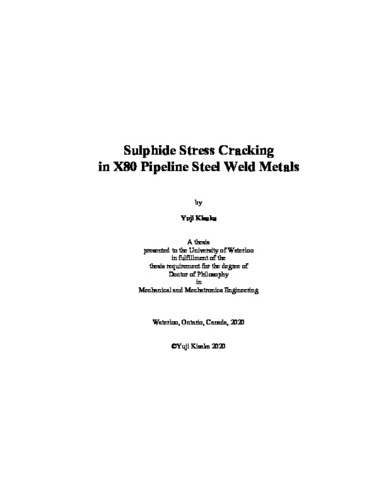 The utilization of high strength linepipes provides various benefits, including reducing construction cost, and operational cost. On the other hand, the girth welds for such pipelines are welded onsite, and simultaneously require strength overmatching of the weld joint, high fracture toughness, and low hardness, regardless of whether these mechanical properties are potentially at odds with each other. Moreover, hardness in the welds must be maintained below HV250 for high strength pipe grades used in natural gas pipelines if they are used for severe sour service applications, where severe sour is defined as SSC region 3 in the NACE standard MR0175/ISO 15156, as the range where H2S partial pressure exceeds 1 kPa, and below a pH of 3.5, and above 100 kPa and below a pH of 5.5. Thus, it is very difficult to employ high strength pipeline materials such as those exceeding API X70 grade for such applications. This particular hardness criterion has been standardized by NACE standard MR0175/ISO 15156 and European Federation of Corrosion publication number 16 (EFC No.16) to avoid sulphide stress cracking (SSC) initiation, and was determined by experience and testing; however, the tests had been performed several decades ago on rather different steel chemistries than those used today. Since recent steels and weld metals have significantly different chemical composition and grain size, thus this hardness criterion has become controversial. Meanwhile, some recent research papers mention that acicular ferrite is one of the fine microstructures and argued that intragranular can improve resistance to hydrogen embrittlement. Thus, the present work evaluates these issues on API X80 grade weld metals. This involves establishing a control method of acicular ferrite volume fraction in the weld metals. The relationship between kinds of microstructures and SSC susceptibility for GMA weld metals is then compared to validate a critical hardness value. The actual microstructural features which provide a hydrogen trap mechanism in particular are demonstrated for the acicular ferrite microstructure in the GMA weld metal, by using a combination of electron microscopy and hydrogen micro-printing. The role of microstructure on SSC susceptibility and the influence of hydrogen charging on strength and hardness properties are then compared. The results show that it was possible to produce X80 grade weld metals with differing intragranular ferrite (acicular ferrite) volume fractions, by controlling the relationship between the titanium and oxygen ratio. The most effective balance between titanium and oxygen contents for maximizing intragranular ferrite corresponds to an ideal stoichiometry of Ti2O3. Next, SSC tests are performed in accordance with NACE MR0175/ISO 15156 (using a test solution) based on the (3 and 4 points bending method) on this material with varying intragranular ferrite volume fraction. These results confirm that weld metals exceeding 98% intragranular ferrite volume fraction and low grain boundary ferrite are able to pass the SSC test even if their hardness value exceeded 250HV. Furthermore, in order to reveal the roles of intragranular ferrite microstructure for SSC susceptibility, the hydrogen microprint technique combined with Scanning Electron Microscopy observation was used to compare the microstructures of specimens which passed and failed the SSC test. It was confirmed that grain boundaries within the intragranular ferrite are effective hydrogen trapping sites, and it appeared that nano-carbides prevent motion of dislocations which carrying diffusible hydrogen. Moreover, intragranular ferrite exhibits high toughness due to fine grains which promote crack deflection more effectively than grain boundary ferrite. Thus, it is suggested that intragranular ferrite can increase SSC resistance based on these mechanisms resulting from the desirable microstructural features. Finally, mechanical properties, such as tensile behaviour was investigated following hydrogen charging for two weld metals with differing intragranular ferrite volume fractions. The stress-strain curves for weld metals involving a higher intragranular ferrite volume fraction were less affected by hydrogen compared to the case of low intragranular volume fraction, and this is attributed to the difference of hydrogen trapping as revealed by thermal desorption analysis. In conclusion, this research proposes that intragranular ferrite dominant structures in high strength steels can decrease SSC susceptibility and stabilize mechanical properties in sour environments by providing strong trapping sites.