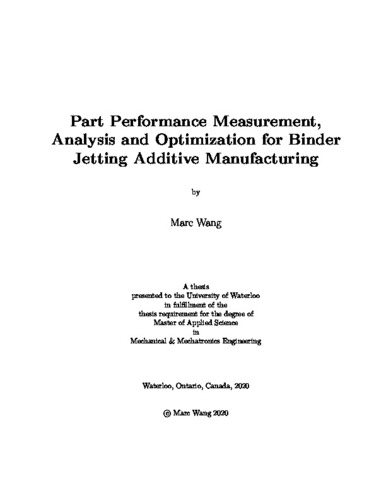 Binder Jetting (BJ) is an additive manufacturing (AM) process where objects are formed layer by layer. The manufacturing of parts is performed by depositing powder layer by layer and binding them together using a binding agent resulting in a green part. This is followed by thermal processing to fuse powder particles together. Unfortunately, achieving full density through the thermal process is difficult due to the low initial density of the green part. Full density will result in substantial shrinkage. Consequentially, there is an incentive to maximize the density of the green part. Sadly, due to the presence of surface connected pores, measuring the density of green parts is not trivial. This work will propose a measurement methodology for measuring green density and processing computed tomography images obtained from green binder jetting parts. It was discovered that no standard was codified for the density measurement of such parts using either Archimedes or Micro-Tomography. Based on experimentally informed analysis, the use of the methodology ISO 5013 for measuring relative bulk density is recommended. Among the three methodologies evaluated (oil infiltration and wax coating), ISO 5013 was the method with the lowest average estimated measurement error (0.36%). In parallel, computed tomography datasets were analyzed, where multiple global threshold techniques were evaluated to extract bulk density metrics. Through experimentally informed analysis, the threshold method Otsu, Mean and Isodata were the most consistent at segmenting computed tomography image of green samples. The second section of this thesis tackles heterogeneity issues found in previous work. Wheat et al. attributed the heterogeneity to powder segregation. Unfortunately, due to the fragility of green BJAM parts, only computed tomography could observe the internal powder arrangement. Consequently, particle segmentation and detection software was developed, specifically tailored towards capturing the particle space for BJAM parts. Two approaches were tried: curvature-based watershed segmentation and Mask-RCNN. The micro-tomography images were knowingly degraded to achieve high data acquisition throughput. Unfortunately, this heavily degraded the performance of both Watershed and Mask-RCNN segmentation. Watershed segmentation displayed acceptable segmentation (70.7%) but poor detection performance (26.6%). Alternatively, Mask-RCNN scored similar segmentation performance (71.3%) with watershed but with twice the detection (48.1%). Regrettably, current performance of Mask-RCNN are inadequate for use in detecting particle segregation. The last section proposes the use of multi-objective Bayesian optimization algorithm for optimizing the process parameters for BJAM. The proposed algorithm managed to minimize porosity (37.5%), while keeping print time low (87 min). Unfortunately, dimensional fidelity were still low (Δ 2.33 x 1.86 x 1.95 mm). The method has the potential of reducing the number of empirical trials to perform optimization, while still achieving Pareto optimality for AM. Future work will be done in improving the efficiency of this method and robustness against noise.