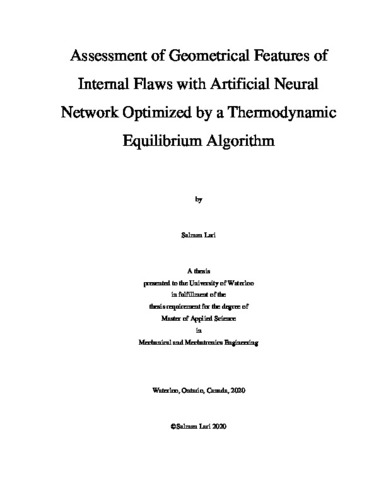 In nondestructive testing (NDT), geometrical features of a flaw embedded inside the material such as its location, length, and orientation angle are critical factors to assess the severity of the flaw and make post-manufacturing decisions. In this study, a novel evolutionary optimization algorithm has been developed for machine learning (ML). This algorithm has been inspired by thermodynamic laws and can be adopted for artificial neural network (ANN). To this end, it was applied to the oscillograms from virtual ultrasonic NDT to estimate geometrical features of flaws. First, a numerical model of NDT specimen was constructed using acoustic finite element analysis (FEA) to produce the ultrasonic signals. The model was validated by comparing the produced signals with the experimental data from NDT tests on the specimens without and with defects. Then, 750 numerical models containing flaws with different locations, lengths, and angles were generated by FEA. Next, the oscillograms produced by the models were divided into 3 datasets: 525 for training, 113 for validation, and 112 for testing. Training inputs of the network were parameters extracted from ultrasonic signals by fitting them to sine functions. The proposed evolutionary algorithm was implemented to train the network. Lastly, to evaluate the network performance, outputs of the network including flaw’s location, length, and angle were compared with the desired values for all datasets. Deviations of the outputs from desired values were calculated by a regression analysis. Statistical analysis was also performed by measuring Root Mean Square Error (RMSE) and Efficiency (E). RMSE in x-location, y-location, length, and angle estimations are 0.09 mm, 0.19 mm, 0.46 mm, and 0.75, with efficiencies of 0.9229, 0.9466, 0.9140, and 0.9154, respectively for the testing dataset, which demonstrates high accuracy in estimation. Results suggest that the proposed AI-based method can be used to characterize flaws with time of flight NDT approach. This research introduces optimized smart ultrasonic NDT as an exact and rapid method in detection of internal flaw, its geometrical features, and also proves the need to replace this method with conventional method which requires interpretation of the human.