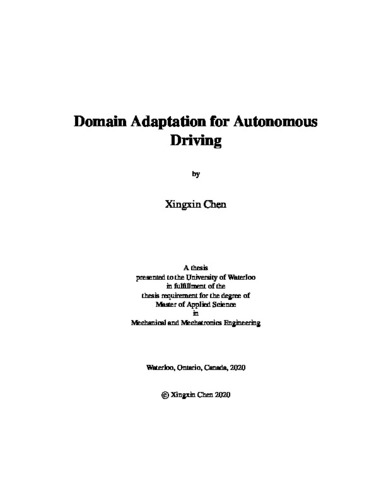 Metric based method is a promising approach to domain adaptation, which aims to align the marginal distribution of different domains with a similar conditional distribution. The thesis explores applying domain adaptation for autonomous driving and proposes domain adaptation methods for 2D image semantic segmentation and 3D point cloud object detection. For 2D image semantic segmentation domain adaptation, traditional approaches design metric function manually to measure the distance across domains. The adversarial methods can be considered as an automatic learning approach for the metric function. Instead of depending on the quality of metric function, this thesis outlines a generalized framework for domain randomization which first introduces moderate perturbation as randomness and then combines the advantage of metric-based domain adaptation and domain randomization. Then a simple-to-implement training pipeline of this framework is proposed, which proves that the proposed model achieves comparable performance with metric-based methods while having better generalization performance. The proposed Metric Guided Domain Randomization approach is able to improve mean intersection-over-union on the target domain from 16.9 to 27.2 without using any target domain data or annotations. 3D point cloud domain adaptation is an area where researchers pay little attention. A method based on global feature alignment is proposed and experiments show that it has a better performance compared with fine-tuning on target domain data directly when having access to a limited number of target data frames.