A Comprehensive Model for Filtration and Adsorption of Intermediate Nanoparticles 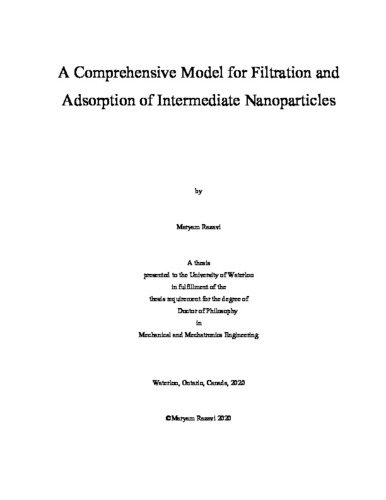 Nanoparticles have been extensively studied in environmental research because of their great impact on human health and the environment. Airborne particles are recognized as the second largest risk factor for non-communicable diseases worldwide in 2018 after tobacco smoking, which also is associated with inhaled particles. Intermediate particles, which bridge gas molecules and aerosol particles, are a major fraction of environmental airborne particles. However, no regulations are available for controlling nanoparticles, despite that such regulations for the nanoparticle emissions are needed for global health and wellbeing. Understanding the behavior of intermediate particles and their separation from the air are important to the policy-making and technology development for the protection of human health and the environment. Separation and deposition of entities underlie the adsorption and filtration processes. Adsorption is a well-known method for the separation of molecules, and filtration is for the separation of airborne particles. Despite the efforts on the theoretical analyses of adsorption and filtration, a holistic framework for the separation of a whole range of entities is needed to unify their mechanisms of separation. This research aims to develop a comprehensive model for the separation of entities including gas molecules, intermediate nanoparticles, and regular nanoparticles, from the air. The specific contributions to the field include 1. Modeling the transport of entities to the nanofiber surface by considering both convective diffusion and interfacial interaction due to the van der Waals force. 2. Modeling the deposition of intermediate nanoparticles onto clean fibers. 3. Modeling the effects of time and concentration on the deposition of all entities onto nanofibers. The first model calculates the rate of particles, transported to the fiber surfaces. The rate of collision based on convective diffusion and interfacial interactive diffusion is calculated by boundary layer analysis around a single fiber. In addition to airflow, the entities are under another streamflow due to the van der Waals force. This model is validated using experimental data from the literature for nanoparticles. The second model is developed by considering the interfacial interaction on the adhesion of intermediate nanoparticles on clean fiber. Brownian diffusion, which has been considered as the mechanism of filtration of sub-100 nm particles, is not affirmative for intermediate nanoparticles. In this model, the interfacial interaction plays an important role in the adhesion and detachment of intermediate nanoparticles. Adhesion probability is determined as a function of particle size and interfacial interaction energy. The third, kinetic model is an expansion of the second one by considering surface coverage, which depends on time and particle concentration. This kinetic model applies to both gas molecules, and intermediate nanoparticles, by considering their surface coverage. Concentration and time may play an interchangeable role in surface coverage and deposition of entities. This kinetic model is validated using experimental data of adsorption and the filtration of intermediate particles in the literature. Finally, the preceding theoretical analyses were used to guide the engineering applications in two case studies. One is the transport and removal of airborne dental particles in a dental office (Appendix A), and the other, facial masks for the filtration of nano/micro-particles (Appendix B). Both studies shed light on the engineering applications of aerosol dispersion and filtration, although they are not directly related to interfacial behavior.