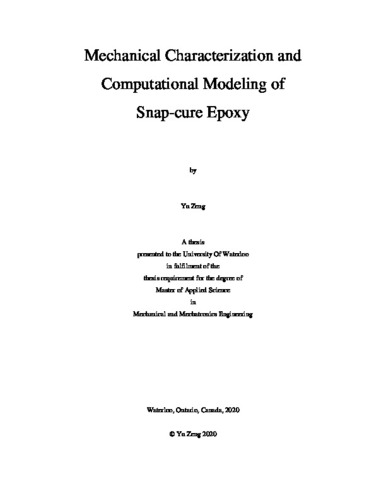 Owing to their high specific mechanical properties and excellent energy absorption characteristics, high-performance carbon fiber-reinforced plastic (CFRP) composite materials are regarded as viable candidates for improving the fuel economy of petroleum-fueled passenger vehicles and increasing the driving range of electric vehicles through lightweighting. The recent development of snap curing epoxy resins, low-cost carbon fiber fabrics, and automated rapid processing technologies provides a promising opportunity to increase usage of CFRP materials in high-volume production vehicles. For these CFRP materials, characterizing the impact performance and strain rate dependent response, which is governed by the properties and local failure characteristics of the matrix material, is required for use in energy absorbing vehicle structures to protect occupants in the event of a crash. The current study investigated and modeled the constitutive behaviour of a three-part snap-cure epoxy matrix material that was formulated for CFRP composites manufactured with rapid resin transfer molding processes. The deformation response of the epoxy under tensile, compressive, and shear loading conditions over a range of strain rates was assessed (i.e., 〖10〗^(-4) to 〖10〗^3 s^(-1) ). The experimental results revealed that the tensile elastic modulus increased by 34% and the yield strength increased by 31% over the range of strain rates investigated. In contrast, the compressive elastic modulus was not sensitive to the change in strain rates; however, the compressive yield strength increased by 81%, demonstrating a strong dependence on strain rate. The pressure-dependent plastic deformation of the investigated epoxy was identified by a clear difference in yield strengths between compression and tension when the material was loaded at a similar rate, where the compressive yield strength was noticeably higher than the tensile yield strength. The tensile specimens exhibited moderate ductile deformation at quasi-static strain rates, while all the tensile specimens fractured in a brittle manner at all strain rates, determined through optical observations of the specimen fracture surfaces. The deformation of the compressive specimens exhibited higher strain to failure in comparison with the tensile specimens, where classical elastic, plastic flow, strain-softening, and strain re-hardening deformation stages were observed. The shear specimens demonstrated elastic deformation, plastic flow, and strain-softening deformation stages, which were similar to the deformation response in the tensile tests at the quasi-static strain rates. Due to the limitation of the shear specimen geometry and mode of failure, only quasi-static and low intermediate strain rate testing was undertaken for the current study. Based on the material characterization results, a Johnson-Cook plasticity constitutive model was used to represent the mechanical response of the snap-cure epoxy material. The constitutive model parameters were calibrated to the measured experimental data and verified using single element simulations in a commercial finite element code (Abaqus). The model was able to describe the deformation responses and the strain rate dependence of the studied epoxy material under tensile and shear loading conditions over a range of strain rates (quasi-static, intermediate, and high strain rates). However, the current constitutive model assumes symmetry in tension and compression, thus the model did not accurately represent the strain rate dependence in compression. The proposed constitutive material model parameters were validated by comparing the results of independent experiments on test specimens under complex stress conditions with that of a computational model that incorporated the calibrated constitutive model. Captured strain maps from the experiments revealed that the investigated constitutive model was able to describe the overall strain response and to locate the locations of critical stresses of the tested specimen. Overall, this study provides much needed mechanical characterization and constitutive model parameters for a snap-cure epoxy material. The results provide support for the development of a robust high-fidelity virtual multiscale-modeling framework aimed at predicting the performance of CFRP materials and energy-absorbing structures.