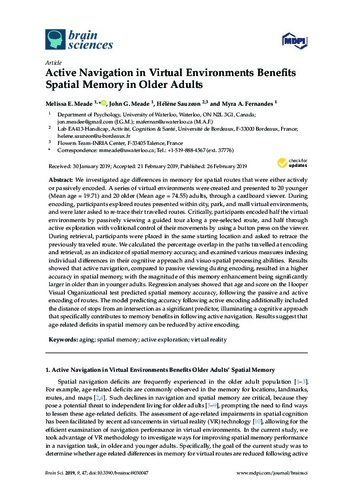 We investigated age differences in memory for spatial routes that were either actively or passively encoded. A series of virtual environments were created and presented to 20 younger (Mean age = 19.71) and 20 older (Mean age = 74.55) adults, through a cardboard viewer. During encoding, participants explored routes presented within city, park, and mall virtual environments, and were later asked to re-trace their travelled routes. Critically, participants encoded half the virtual environments by passively viewing a guided tour along a pre-selected route, and half through active exploration with volitional control of their movements by using a button press on the viewer. During retrieval, participants were placed in the same starting location and asked to retrace the previously traveled route. We calculated the percentage overlap in the paths travelled at encoding and retrieval, as an indicator of spatial memory accuracy, and examined various measures indexing individual differences in their cognitive approach and visuo-spatial processing abilities. Results showed that active navigation, compared to passive viewing during encoding, resulted in a higher accuracy in spatial memory, with the magnitude of this memory enhancement being significantly larger in older than in younger adults. Regression analyses showed that age and score on the Hooper Visual Organizational test predicted spatial memory accuracy, following the passive and active encoding of routes. The model predicting accuracy following active encoding additionally included the distance of stops from an intersection as a significant predictor, illuminating a cognitive approach that specifically contributes to memory benefits in following active navigation. Results suggest that age-related deficits in spatial memory can be reduced by active encoding.